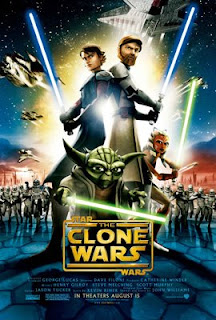 I can't for the life of me understand why George Lucas is so obsessed with the Star Wars prequel universe. I think at this point he is the only one who really cares. What happened to the time of the original trilogy? I'm sick of hearing about the Separatists and padawans and droid armies...seriously does anyone out there really care about what's going on here?

That's what I kept wondering as I watched Lucas' latest lame attempt to squeeze every last penny out of his 31 year old cash cow that he can, the animated Star Wars: The Clone Wars.

I knew I was in for trouble when I saw the first trailer, when Yoda said "kidnapped, Jabba the Hutt's son has been." And lo and behold, Lucas built the entire movie around that, using director Dave Filoni as his lackey for hire.

Taking place between episodes II and III, Clone Wars follows Anakin Skywalker and Obi-Wan Kenobi, as they are sent to rescue Jabba the Hutt's son, Rotta the Huttlet (I'm not even kidding), after Jabba called upon the Jedi to help. At stake is a treaty with the crime lord for safe passage of Republic troops through the Outer Rim territories in the fight against Count Dooku and the Separatists. But there are much darker forces at work here - Dooku is behind the kidnapping of Rotta, with his lethal assassin Ventriss, who plans to kill Rotta and frame the Jedi, in order to form a deadly alliance with the Hutts.

I could spend all day talking about the inanity of the plot, but I may come across as a major Star Wars geek. I'm a fan of the original trilogy, and actually liked Episode III, but I'm no fanboy, although I have retained quite a bit of Star Wars knowledge from my younger, action figure days. The central role played by the Hutts just doesn't make sense...when have the Hutts ever been this powerful, and why is the Republic so concerned about making a treaty with a known criminal? And what's with Lucas' obsession with giving characters obvious names like General Loathsom. Is it his way of saying "hey look he's a bad guy!" just like with General Grievous in Episode III?

But that's a different argument for a different review. Suffice it to say that doesn't make much sense when compared with the larger Star Wars universe and the films that came before it.

The major issue with the film is just how bad it looks. The animation is pathetic, betraying its small screen roots. Clone Wars is basically the pilot episode for a planned animated TV series that Lucas liked so much he decided to put it on the big screen. Which was a huge mistake, because Clone Wars is an utter mess.

Setting aside for a moment the shoddy, simplistic animation that looks like it came from a second rate video game, Clone Wars features dialogue so inane, so unbelievably ridiculous, that it makes the hideous romantic speech about sand in Attack of the Clones look like a Shakespearian sonnet. And Lucas didn't even write it! It's made worse by the wooden deliveries of the voice-over actors, who mostly sound like they're just reading by rote. The only life is injected by original actors Christopher Lee as Count Dooku, Samuel L. Jackson as Mace Windu, and Anthony Daniels as C-3PO, who I'm sure were payed handsomely for this, because they're definitely slumming it.

Clone Wars is strictly second rate territory, aimed directly and children and hardcore fans, who aren't even treated with enough dignity to be given a decent movie. Instead they get this laughable cartoon that doesn't even attempt to hide its soullessness. It's a sad indication of just how far Star Wars has fallen, because in The Clone Wars, the original magic is nowhere to be found.

Anonymous said…
I like Star Wars as much as the next non-fan, I like them but I am not mad about science fiction in general, but here is no way I am seeing this now. It opens here on the 26th of September, and I will just have to go without seeing it. I bet that is hard ;) Hahaha, I love the pan by the way - but it is sad to hear that Lucas just cannot give the series a break. He needs a new venture indeed. Something free from franchises.
6:16 PM

Fletch said…
I am Jack's complete lack of surprise.

I think Lucas should make a movie that bridges the gap between Indy 4 and Star Wars 1 - it would be the cinematic equivalent of the apocalypse. I can see it now - Indiana Jones and the Curse of the Padawan Sand Princess.
9:05 PM

Matthew Lucas said…
I went more out of morbid curiosity. My best friend and I attended a matinée on Friday afternoon. There were only about 7 other people in the theater, and we sat on the very back row so as not to bother anyone else and made fun of it the entire time. So, all things considered, I had a great time, probably more so than I would have had if it was actually a good movie. It's a future Mystery Science Theater 3000 special for sure.
9:32 PM