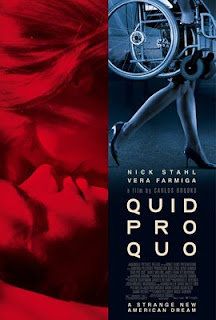 Whenever I hear someone use the phrase "quid pro quo" I am immediately reminded of Hannibal Lecter's ultimatum to Clarice Starling in The Silence of the Lambs, that their meeting of the minds would be strictly quid pro quo, "I tell you things, you tell me things."

Carlos Brooks' Quid Pro Quo is by no means anything like Silence of the Lambs in either plot or execution, but that mutual sharing of information is an essential element to this strange and beautiful little film.

Running a scant 82 minutes, Quid Pro Quo may seem like a blip on the 2008 movie going radar, but it's one of the most unique and engrossing films I have seen this year.

In it, Nick Stahl plays Isaac, a paraplegic public radio host who is assigned to do a story on a man who walked into a hospital and tried to bribe a doctor to amputate his perfectly healthy leg. In the process he discovers a bizarre subculture of perfectly healthy people who dream of being paraplegics. It is there he meets and falls in love with the beautiful and mysterious Fiona, a museum restoration artists who longs to be paralyzed herself, while Isaac dreams of one day being able to walk again. Together they form an unusual relationship, as they work to achieve their two diametrically opposed but irrevocably connected goals, to become who they truly want to be. 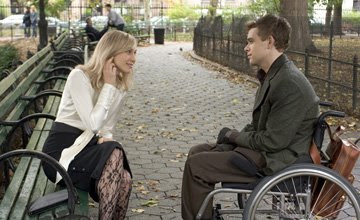 Vera Farmiga brings Fiona and her deep seeded forbidden desires to haunting life in what is quite possibly the performance of her career. She is incredibly good, nearly single handedly pilfering the movie from Stahl, who nevertheless does a fine job of holding his own. They are aided by the tightly crafted screenplay and Brooks' solid direction, which strips the film of useless excess to create a lean, extremely effective dramatic arc. 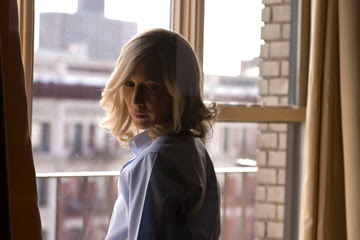 Without Farmiga, Quid Pro Quo may not have had the same impact that it does, and I want to know why we're not hearing more buzz around her from the critics. This is the kind of film and performance that critics need to be championing to put it on the radar beyond specialty art houses. It was never going to be a mainstream success, it's far too dark and strange for that (it was only in theaters for a week), but I would love to see Farmiga show up on some year end precursor awards to put her in the 2008 Oscar race. She's that good. Her Fiona is tragically lost woman in search of her soul, whose macabre desires are buried in a shadowy past - it's a devastating performance that should not be overlooked come awards time.

Even beyond her though, this is a fascinating film. Brooks takes us into a world of dark human fantasies of which they dare not speak, and makes it seem accessible and oddly beautiful. Quid Pro Quo is an enthralling, erotically charged drama that marks the terrific debut of a director that is most certainly a talent to watch.

Anonymous said…
Hopefully I catch this soon, it sounds great.
4:55 AM

Matthew Lucas said…
It comes out on DVD Tuesday, I hope you get a chance to see soon. It's a sadly overlooked little gem.
9:48 PM

Anonymous said…
I hated this film with a vengeance! It is a pale imitation of Matsumura's BLIND BEAST and Cronenberg's CRASH. It is contrived, over-the-top and convoluted, but I'd admit Farmiga was excellent.

Now, let me be fair to say, please don't go back at me too hard. I love the site, appreciated your posts, admire your eloquence an dlook forward to your next review. I just don't like this film.
2:14 PM

Matthew Lucas said…
No problem Sam. I don't mind disagreement as long as it's civil.

In all fairness I haven't seen either of the films you mention here, although I've been quite interested in seeing Cronenberg's CRASH for a while. I just haven't gotten around to it.
6:28 PM

Daniel said…
Nice to see this get a positive treatment somewhere, or really any treatment at all (but Sam - your review is sharp on the dissenting side as well).

How great was it to see Phil LaMarr again?

I like your championing of Farmiga in a role that she obviously took to heart. The distribution is what killed the chances for QPQ, but as you say, it's not very mainstream, either.

Was I the only one in suspense throughout much of it?
6:05 PM

Matthew Lucas said…
No Daniel you weren't, I found it quite suspenseful, however I hesitated to call it a thriller because that doesn't quite cover it.
6:13 PM