Review: "Flight of the Red Balloon" 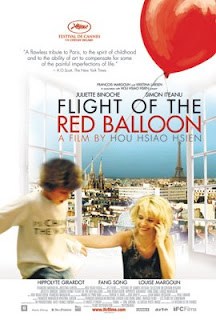 For anyone who has seen Albert Lamorisse's 1956 children's classic The Red Balloon, Hou Hsiao Hsien's Flight of the Red Balloon will hold an extra special sense of nostalgia and magic.

That's not to say that one needs to have seen The Red Balloon to appreciate or understand Hou's film. Flight of the Red Balloon is an homage to the Lamorisse film, not a remake or a sequel. Hou takes The Red Balloon as a starting place of inspiration, and builds around it a loosely structured slice-of-life narrative about a little boy, his preoccupied mother, and their new nanny.

Juliette Binoche is in fine form indeed as Suzanne, a harried voice over artist and single mother who loves her son, Simon (Simon Iteanu), dearly, but is having trouble balancing her family life with work obligations and an ongoing legal battle with a deadbeat tenant who lives downstairs.

As a result, Simon must create an idyllic world of his own. He is a quiet child, content to play video games or wander around the streets of Paris on his way home from school. He is also very observant of the world around him, and when his new nanny, filmmaking student Song (Fang Song) arrives, Simon begins helping her make a movie about a red balloon in honor of Albert Lamorisse. 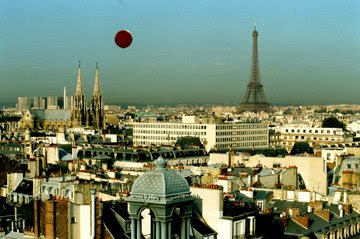 The film doesn't have what one would call a conventional plot or a typical narrative structure. It is more content to meander much like the red balloon of its title. It flits about through the lives of the three central characters, content to observe and occasionally interact with what is going on. This unique structure has been an issue for some, who call the film aimless and dull, but I think that misses the point of what Hou was going for here. He isn't trying to tell a story, he's trying to evoke a feeling, an essence if you will, of childhood innocence, in an unconventional way.

Simon doesn't have a typical idyllic childhood. He doesn't lead a bad life, but neither is it your typical sunshine and red wagons Hollywood existence. He doesn't play with other children much, and spends most of his life around adults with their own sets of problems. So he takes his innocence with him. 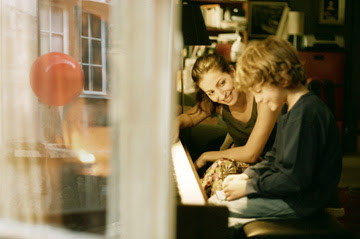 As the film progressed, I couldn't help but wonder if Simon was the only person who could see the red balloon that follows him around for most of the film. No one else seems to acknowledge its presence. The original Lamorisse film is mentioned several times, but Simon is seemingly the only one who pays any attention to the actual balloon. This could mean several things. In many ways I think the balloon is representative of childhood and the innocence that goes along with it. The balloon is playful and flighty, and the adults are either too busy to notice or just can't see it at all.

I loved how Hou seemed to capture that beautiful melancholy of childhood existence, the carefree happiness surrounded by an untraceable sadness, striking a delicate balance between the dichotomous emotions. It's also interesting that, with a few exceptions, most of the actors maintain their real names in the film, adding to the film's naturalistic flow.

If nothing else, Flight of the Red Balloon is an exquisitely crafted, beautifully modulated film, featuring some heartbreakingly gorgeous cinematography by Pin Bing Lee. It's a slow burner, and definitely not for all tastes and sensibilities, but I found it intoxicating from beginning to end. It is a charming, achingly beautiful ode to childhood, channeling the pure-hearted essence of Lamorisse's immortal masterwork, and ranks right up there among 2008's finest films.

Anonymous said…
Fine review, Matthew. I cannot wait for this to be on DVD.
8:58 PM

Matthew Lucas said…
Thanks Rick. It's currently available through Netflix and Blockbuster...but it won't be available to buy until October.
9:37 PM

Anonymous said…
Come on! You can write better than that.
9:35 AM

Anonymous said…
"Anonymous" is a coward indeed--this was VERY WELL written and passionately conveyed. I must see this film again as I I seem to be one of the only people with problems. I absolutely adored THE RED BALLOON and remember it fondly as the first film I ever saw in my undergrad film class, and still show it to my kids regularly. And I lov ethe director of this new film! Yet, I found on the firsty view that the metaphysics were static an ddistancing, and the film was a crushing bore. Maybe I should see a psychiatrist? LOL.
Again, very nice piece here.
11:31 AM

Matthew Lucas said…
Thank you Sam, that means a lot coming from you. I tend to write my reviews very quickly after I see a film in order to stay topical, and as a result I don't often spend as much time on them as I should. But I spent a little more time than usual on this one and was quite happy with it.

Also, I hate anonymous commenters. I probably wouldn't allow them at all if it weren't for the fact that most of my newspaper readership does not have a Blogger account, and I would not want to discourage them from commenting if they ever felt compelled to do so.
12:00 PM