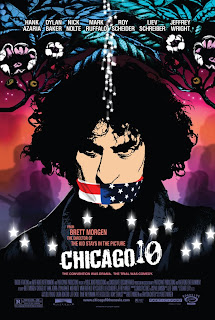 It's interesting watching Chicago 10 while the 2008 Democratic convention is going on in Denver at the same time that the events chronicled in the film happened nearly forty years ago to the day.

It is especially shocking to the eyes of a 22 year old to see such unrestrained violence and police brutality over a peaceful war protest, even with our own modern day parallels with the Iraq war. One would hope that such a thing would be unthinkable now, but it never seems too far removed from the realm of possibility.

Directed by Brett Morgan (The Kid Stays in the Picture), Chicago 10 is a documentary pieced together from animated reenactments and archival footage that tells the story of the riots during anti-war protests at the 1968 Democratic convention in Chicago, and the ensuing trial of ten of the protesters that turned into a circus of injustice. Images of the protests and riots are taken from archival footage from the time, but the most striking and unique aspect of Chicago 10 is the animated recreation of the trial, using actual courtroom transcripts, and the voice talents of Hank Azaria, Dylan Baker, Nick Nolte, Mark Ruffalo, Roy Scheider, Liev Schreiber, and Jeffrey Wright. 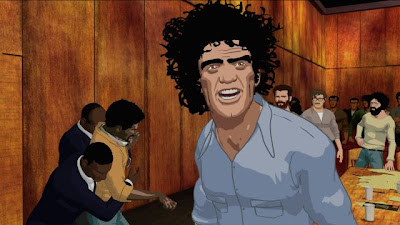 The animated sequences capture the chaotic atmosphere of the trial, as the defendants introduce a little anarchy into the proceedings, and the establishment judge does everything in his power to shut them down, including denying them their constitutional rights. My only question, ultimately, is why? They give the film a jolt in the arm, and the transcripts are harrowing and hilarious in and of themselves, but what purpose does the animation serve? Why not do live reenactments, or a narrative film?

The animation works, however, as the audacious experiment that it is meant to be. Morgan captures the fiery spirit of the protesters whose intentions were noble but whose methods were ultimately misguided, and just as responsible for the anarchic trial as the unyielding authorities. To paraphrase The Dark Knight, an unstoppable force met an immovable object, and all hell broke loose in Chicago. 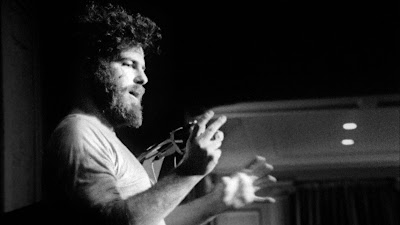 It's obvious from the get-go who the "good guys" are, but I think Morgan went a little too far in vilifying the judge, who, as voiced by Roy Scheider, sounds more like Emperor Palpatine than an actual human being. I think the transcripts and actions of those involved speak for themselves enough not to need any editorial pushing from the filmmakers.

The animation and free-flowing style, however, lend themselves to a more impressionistic approach, and as an exercise in style and form, Chicago 10 is most certainly successful. It isn't as ultimately illuminating as one might hope, but it tells the story in a powerful way that is impossible to ignore. This is in your face, risk taking documentary filmmaking that gets its point across without feeling the need to preach or explain its meaning. Morgan's brash take on recent history never feels like the history lesson that it ultimately is, which makes it something to be respected and learned from.

Anonymous said…
I would like to see this one someday.
12:21 AM

Matthew Lucas said…
It's definitely worth a look. I'm interested to see if the live action narrative film ever comes to fruition. It should be interesting.
11:08 AM

Carl Joseph Papa said…
just saw this one yesterday and thought it was very interesting and good though lacking. nice review :)
12:55 PM

Daniel said…
I think your last paragraph excellently puts things in perspective here. You hope you'll get more out of it, but when you don't, you still have the animation to appreciate.
3:00 PM