Life is But a Dream 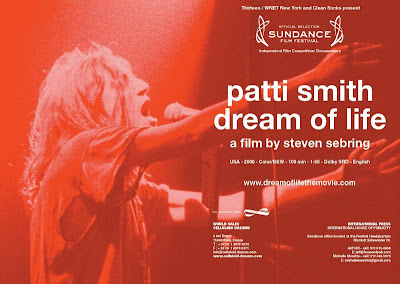 Steven Sebring's sublime Patti Smith: Dream of Life opens today at the Film Forum in Manhattan, and is NOT a film to be missed.

Here's a brief excerpt from my four star review:

This is a film that must be felt, not described, reflected on, not explained. It is an emotional journey, a force of nature, an exhilarating and original rock and roll love poem that is not only the best documentary I have seen this year (or in several years for that matter), but one of the best films of the year period. It's beautiful...masterful...perfect.

Currently, the film is sitting at #2 of all the films I have seen this year, just behind Cristian Mungiu's brilliant 4 Months, 3 Weeks, and 2 Days.

Nick Plowman over at Fataculture has also written an eloquent appreciation of it that I think conveys my feelings toward it even better than I did. Check it out.

Anonymous said…
It isn't in my top five at this point, but I can certainly evince great respect for you feeling that way, and your review make an excellent case for it. "a film to be felt and reflected open" indeed that is surely the way this one goes. I am actually still pondering my experience and final assessment, but again, kudos on both your review and Nick Plowman's. Both of you have done some of your finest work with this.
12:17 AM

Matthew Lucas said…
Daniel - yep. #2 for the year, sandwiched right between 4 MONTHS, 3 WEEKS, AND 2 DAYS and THE BAND'S VISIT. So by your calendar I guess that puts it at #1.

Sam - sorry you didn't feel the same love for it I did Sam. It just hit me right. It's definitely one I keep coming back to over and over in my mind, one of those films I really connected with.
1:24 AM

Anonymous said…
Fair enough Matthew. I am going to make a prediction: when you see MAN ON WIRE, you are going to have a real problem at or near the top of the list. LOL! I could be wrong, but I suspect you will lov eit (and rightfully so).
10:18 AM

Anonymous said…
Thanks for the plug Matty, and thanks even more for pointing me to the film. It played at that fest that I could not attend, but I saw the film before it actually played AT that festival, which is weird. Whatever, I agree, it is not to be missed.
5:33 PM