Sometimes a movie just hits you. It comes out of nowhere and blindsides you in such a deeply moving way that it's hard to articulate. That is how I feel about Nati Baratz's Unmistaken Child (Oscilloscope, 6.3). 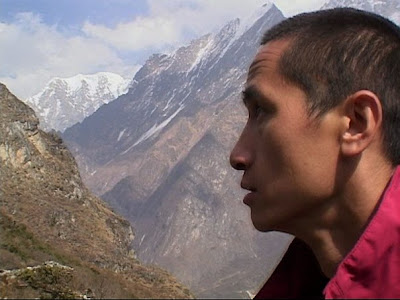 This incredible documentary tells the story of Tenzin Zopa, a Buddhist monk who sets out to find the unmistaken reincarnation of his master, Lama Konchog. I've seen this process in narrative films such as Martin Scorsese's vastly under appreciated Kundun, but never like this. Filmed without talking head interviews or unnecessary trappings, Unmistaken Child plays out like a real life narrative, becoming a deeply moving and unforgettable spiritual journey.

There has been relatively little buzz about this one, and I want to start some, because this is the best documentary I've seen all year. This extraordinary film will be playing at the River Run Film Festival in Winston-Salem this month, and will be released theatrically by Oscilloscope on June 3, at which point I will post a review.

Here is the trailer:

Monte said…
I find that the best moves are the Criterion Collection films. I will have to check this one out though.
4:35 PM

Sam Juliano said…
Matthew, you have really been getting the jump on some quality stuff as of late, and I also look forward most enthusiastically to this one for a number of reasons. Excellent trailer there!
4:30 PM