Review: "Of Time and the City" 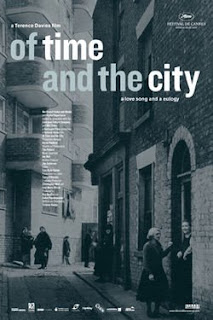 It all starts off with great promise. Terence Davies' haunting tone poem, Of Time and the City, is at once a love letter to his hometown of Liverpool and a eulogy for the city of his childhood memories. It is filled with striking images, culled from both archival footage and original photography, that create singular portrait of a man's hometown and its inexorable evolution into something more modern and unrecognizable.

But then Davies begins to speak.

I've never been a big fan of narration, but I can see and understand what Davies was going for here, and it could have worked. But his deep rich voice reciting poems over countless Liverpool images quickly begins to sound like a parody of a pretentious art house film.

This is the kind of movie that causes people to make fun of art house films. Davies alternates between moments of sublime beauty to moments of stifling self-importance. When he steps back and lets the images and music work in tandem and speak for themselves, Of Time and the City becomes something thoroughly mesmerizing, but his narration is often grating and self-parodic. 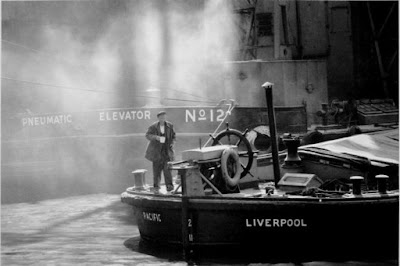 The glimpses into Davies' childhood, especially his struggling with his homosexuality in an extremely intolerant Catholic environment, are often quite poignant. But the more he talks about them, the more heavy-handed it seems. There were times during the film where I cringed at the overripe dialogue, that often seems like the kind of poetry that is trying too hard to sound poetic, if that makes any sense.

Of course, to give credit where credit is due, some of it is quite beautiful. But these moments are quickly swallowed up in what ends up being one giant ego-centric mess. I wanted to like it, I really and truly wanted to like it, but by the time it was over I was just exasperated with it. During its more lyrical passages I would finally find myself sinking into its shimmering black and white embrace, before being rudely jerked out again by Davies' incessant narration. 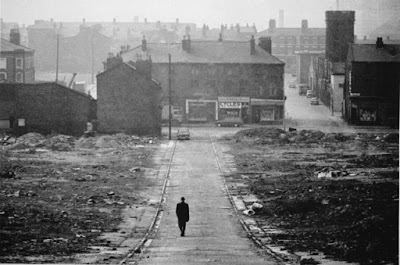 It's easy to see just from the images I have included with this review what a haunting visual quality the film has (the recurring theme of buildings being razed is especially heartbreaking, sweeping away the memories of old), and it is without a doubt a work of art. But it's the kind of art that people like to pat themselves on the back for liking to make themselves feel sophisticated, but it's really absolute rubbish.

Aesthetically, yes, Of Time and the City is quite appealing. But it also thinks way too highly of itself. It's a pompous, ostentatious mishmash of artful lyricism and egotistical self-aggrandizement. Somebody has to be the one to stand up and say the emperor has no clothes.

OF TIME AND THE CITY: Directed by Terence Davies; Not Rated
Email Post

Sam Juliano said…
Well Matthew, I didn't have an issue at all with what you call "incessant narration" but I still respect your position. I loved this film, and at this point I'd say it'sd the film of the year for me. I was actually preparing my own review for the upcoming days. But as always you do a masterful job deliniating the film's essence, and I appreciate your positive reaction to the material. What I liked from the narration were the uses of quotes from the literary figures, but I saw the modernization of Liverpool as a microcosm of similar wordly metamorphosis.

Charles Lyons said…
I liked the film OK (2.5/4). I agree with you that the visuals were striking and complex, and Davies' narration is at times very funny, but I felt that it was when he tried to be poignant when he lost me.

So I guess I was stimulated by parts of the film, but never emotionally connected; always distant.
6:06 PM