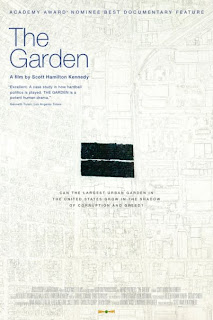 Not many people had heard of The Garden when it was nominated for Best Documentary Feature at this year's Academy Awards. It was up against high profile players like Man on Wire, Trouble the Water, and Encounters at the End of the World.

Shot over a period of 2 and a half years, The Garden tells the story of the largest community garden in the country, nestled right in the middle of South Central Los Angeles, in an area once ravaged by the Rodney King riots.

Born out of the ashes of racial strife, this 14 acre green oasis is tended to by the mostly Hispanic population, who grow their own food and have created a lifestyle in this wholly unique environment. 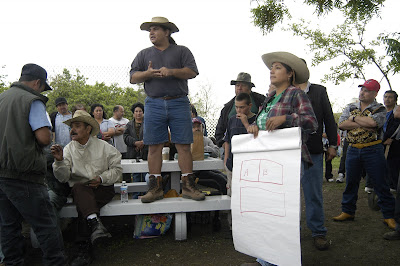 But all of that is disrupted when the city of Los Angeles, in a secret back room deal, sells the land back to its original owner, a wealthy land developer, for the same price they payed him for the land back in 1992.

Soon the gardeners find themselves facing the destruction of their garden, but they refuse to go quietly. Instead, they head to the courts to fight the eviction, up against powerful political opposition in league with land developers with a sketchy track record of raising millions only to produce cheap, substandard results. As their plight gains national attention, celebrities such as Daryl Hannah, Willie Nelson, Danny Glover, and James Cromwell, as well as politicians such as Dennis Kucinich, descend on the garden to try to raise some awareness of their own.

But the gardeners find themselves in an increasingly uphill battle, fighting against a seemingly uncaring system filled with political red tape, racial tension, and good old fashioned greed. As the gardeners become embroiled in a fight for their very lifestyle, The Garden takes on a universal urgency that is both riveting and heart wrenching. 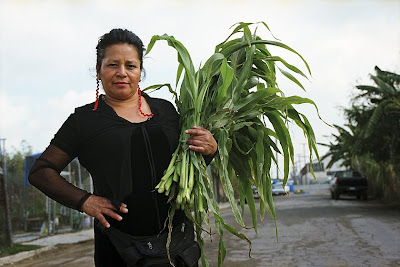 Kennedy's film is both straightforward and powerfully contemporary, and in a world where corporate and government greed makes headlines almost every day, The Garden becomes a sort of microcosm of our society. The farmers represent the populations that often go overlooked, struggling to make a living while fat cats make secret deals in dark and smoky rooms. This is a story to be outraged about, to get up on your feet and shout from the rooftops. How is this possible in 2009? Why haven't we learned our lesson? Why, in the rubble of the Rodney King riots, does racism still lurk unnoticed in the hearts of those who should know better?

It's probably one of the saddest observations in the film, as members of the mostly African-American South Central L.A. rail against the gardeners for not representing the majority of the population. Racism is a vicious cycle, and the South Central gardeners end up as victims on several levels, but their resilience and strength is both remarkable and inspiring. Their battle against social injustice and their stand to protect their green haven amidst the skyscrapers should be an example for us all. The Garden is an extraordinary documentary and a stinging portrait of social injustice, that quite simply, should be required viewing. I defy anyone not to feel some emotion out of it, be it anger, sadness, or both.

As a portrait of out time, The Garden is both inspirational and sobering. This is the kind of documentary that reminds us just how powerful a documentary can really be.

Sam C. Mac said…
This one I'm dying to see. Sounds a little like "Trouble the Water," in that a sort of impoverished people is getting screwed by their justice system. The topic seems really fascinating as well, and the trailer is makes it look even more compelling.

jennybee said…
Can't wait to see this one. I fell hard for the trailer alone. I was secretly rooting for it to upset at the Oscars, though that would have been super surprising.
11:13 AM