Review: "Throw Down Your Heart" 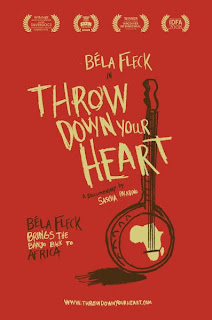 I've never been a big fan of traditional Southern music. It has just never really been my cup of tea, even though I'm from North Carolina and I've been around it all my life.

However, I have had the pleasure of seeing banjo virtuoso and multiple Grammy winner Bela Fleck perform live before (with Doc Watson, no less), and it's hard not to enjoy and appreciate his immense talent.

Fleck is probably the most famous banjo player this side of Deliverance, and in Sascha Paladino's new documentary, Throw Down Your Heart, he takes his banjo on the road to Africa, searching for the origins of his favorite instrument.

The banjo has always been associated, as Fleck points out, with twangy, Southern, white music. But the truth is that the instrument originated in Africa, and it remained alive through slaves who brought its essence with them. So Fleck decides to find this banjo ancestor, and while he's at it to introduce Africans to some traditional American music, and fuse it with their own. 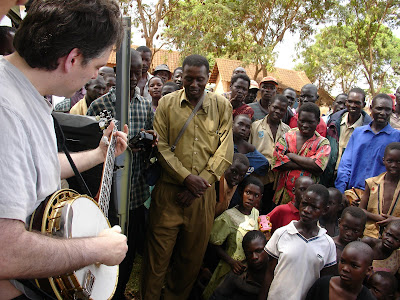 So Fleck sets off on a musical journey across the continent, starting in Uganda, then heading to Tanzania, Zambia, and Mali. In each place, he has a musical guide, usually someone adept in local music tradition, who introduces him to the native music of each country. There, Fleck attempts to adapt his style to meet theirs, creating unique sounds as traditional Southern music meets traditional African rhythms.

In some cases the banjo is a more natural fit than others, and as the film moves along and Fleck gets closer to the instrument's origins (which many believe is in Zambia), the banjo seems more and more at home with the musical styles. By the time he reaches Mali, with its luxury hotels and music stars, the banjo seems like it was always meant to be there. 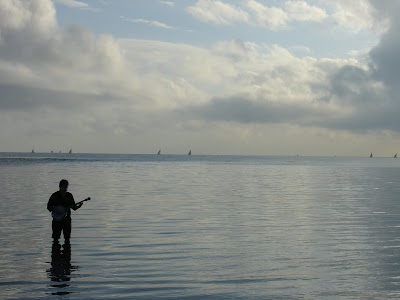 I wish the film had spent more time in Zambia, because that is where I felt like the real story was, the original home of the banjo, playing beside its early cousin, in the very location of the original slave raids. But that all seems to be skimmed over in favor of heading to Mali, which with its air conditioned rooms and royal treatment seems far removed from the more tribal rhythms of the Masai from Tanzania.

But in general, it's entertaining to see the results of these cross-continental collaborations. As a whole the film often feels more like a PBS special than a theatrical documentary, but it's hard to deny the film's charms.

Throw Down Your Heart may not break any new ground in the music documentary department, but it's a journey that I don't regret taking.

THROW DOWN YOUR HEART; Directed by Sascha Paladino; Featuring Bela Fleck; Not Rated; Now playing at the IFC Center in NYC. Additional cities will be added later.
Email Post

Sam Juliano said…
Fair enough Matthew. I get a different side of the coin here than what my friend and your fellow critic Jon Lanthier of SLANT says here:

But you do an excellent job in relating the exotic setting and the influence of African music on the South (cross-continental collaboration, as you call it)

Joseph "Jon" Lanthier said…
Thanks for the plug, Sam, ha! Anyway, agreed that this is a fine, fine review of the flipside argument, even if I felt the whole "slave trade" banjo etiology material was treated rather ham-handedly. At one point an African woman is nearly in tears intimating to Fleck the story of how her ancestors were yanked from their homes in the cover of the night; he can't offer much response but an awkward stare.

I've seen Fleck live, too, with the Flecktones, and he's damn good; I just felt this lacked the magic of his other collaborations. A "PBS Special," indeed.
11:14 AM

Matthew Lucas said…
I'll admit that my original 3 star grade was probably a little generous. But that doesn't change anything I said in my review.

I actually agree with most of what you say in your review, Joseph, but I came away with a more positive impression than you did.

Fleck is not much of a speaker, as one of the musicians he plays with in Mali admits. But then, this is a man who used to never talk in his concerts, he would just stand on the stage, smile, and play.

So yes the subject matter wasn't always as compelling as it could have been, but ultimately I didn't see that as the fault of the filmmakers, and tried not to hold it against them, as they did a competent job of working with what they had.
1:43 PM