Back in the Cave

Rope of Silicon has the exclusive new trailer for The Descent 2. 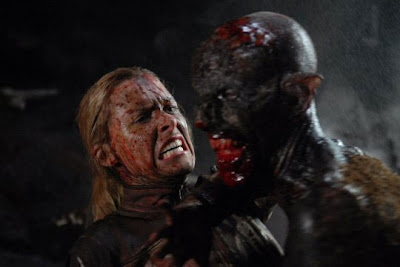 I was a big fan of Neil Marshall's 2006 original, which I think is one of the best horror films of the last 20 years. It conjured up an almost unbearable sense of claustrophobic dread and unease before anything ever happened. In fact I thought the cave was much scarier than the mutants that showed up in the film's last half.

Now we have the almost inevitable sequel, that is obviously pretending that the "everyone dies" original British ending never happened, and is sending Shauna Macdonald's Sarah back into the caves where all her friends were killed to explain to the police why she is covered in their blood.

The trailer isn't bad, but I must say I'm a little skeptical, especially since I prefer the bleaker original ending, and I'm not sure that lightning will strike twice. Then again, 28 Weeks Later did justice to 28 Days Later, so we'll see. In the meantime, check out the trailer for yourself:

Sam Juliano said…
Once again I am in Matthew's corner with the original DESCENT, which (yes indeed) was one of the scariest horror films of teh last 20 years! Absolutely. I am also sceptical that lightening won't strike twice, but let's see...you never know.....good trailer.
4:33 PM