I found it interesting that just last night I popped in my screener of Paolo Sorrentino's Il Divo (Music Box Films, 4.24) to review for the River Run Film Festival, and today clicked over to Jeffrey Wells' Hollywood Elsewhere to find he had just written a well considered piece on the film. And to be honest, we had quite different reactions. 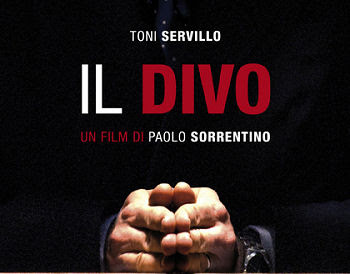 Subtitled The Spectacular Life of Giulio Andreotti, Il Divo, which premiered at last year's Cannes Film Festival, recounts the story of former Italian Premier Andreotti and his Christian Democrat party, that ruled Italy from the end of WWII to the 1990s, and the subsequent investigation into his mafia ties and connections to several politically motivated murders.

As an exercise in sheer style, I found Il Divo fascinating. I enjoyed watching this more than Matteo Garrone's much ballyhooed Gomorrah. But ultimately I found it convoluted and scattershot. I couldn't help but wonder as I watched the film if I would be able to follow it better if I had any knowledge of Italian politics, which I do not. There are just so many people, allegiances, and motivations to keep up with that it's a bit hard to follow. It doesn't help that it shifts between a somewhat satirical to a deadly serious tone.

Toni Servillo, on the other hand, is excellent as Andreotti. With his ramrod-straight posture, his tense shoulders and drooping ears, Servillo gives Andreotti a sense of extreme power, bottled up and housed inside a deceptively elfin figure. It's enough to make me want to revisit the film, which I may well do before its April 24 release. I'll post a full review closer to then, in the meantime, here is the film's trailer:

Sam Juliano said…
Why do so many Italian mobster films use Catholic masses in their violent sequences? LOL!!!

Anyway, your review looks quite promosing for this, and I also come to this not caring very much for GOMORRAH. I didn't read Wells's piece yet, but you own assessment is good enough for me.
4:37 PM