I'll be expanding on this during my coverage of the River Run Film Festival, but I loved this so much I just had to say something. 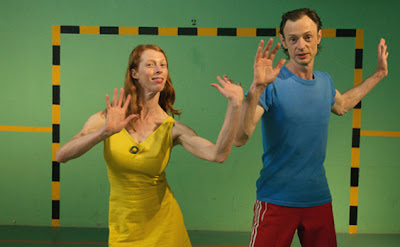 This beguiling French comedy about two teachers whose love of the Rumba is interrupted by a series of disasters is one of the best comedies I've seen in ages. Brilliantly directed by Dominique Abel, Fiona Gordon, and Bruno Remy (who also star in the film), Rumba, which has almost no dialogue, calls to mind the work of Jacques Tati, and is a kind of modern day M. Hulot's Holiday. I honestly haven't seen a funnier film all year, or one that is more exquisitely framed. It's a delight from start to finish, and it completely won me over.

There is no scheduled US release date, although Koch Lorber Films has acquired American distribution rights. It will be playing at the River Run Film Festival in Winston-Salem later this month, so if you live in North Carolina, don't miss this one.

Check out the trailer here: