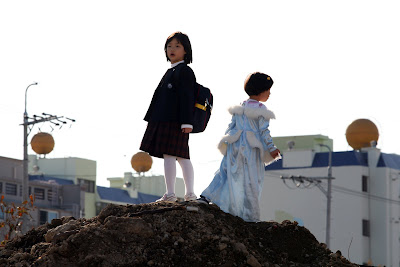 It's often lumped in with the growing realism trend among independent filmmakers, or as A.O. Scott recently dubbed them in a somewhat controversial article, the Neo-Neo Realists. He cites other films in this movement (which really isn't any kind of organized movement as it is an overarching trend) such as Kelly Rechhardt's Wendy and Lucy, Rahmin Bahrani's Goodbye Solo, and Anna Boden and Ryan Fleck’s Half Nelson, so Treeless Mountain is in some very distinguished company.

While I don't think it is as good as the other film's mentioned, I found myself quite taken with it, and it has grown on my quite a bit in the days since seeing it. This story of two young girls who are left with their uncaring aunt while their mother goes in search of their deadbeat father is both tender and moving. The girls are completely winning and carry the entire film, which is quite a feat considering that there only 4 and 6.

Treeless Mountain will be released at New York's Film Forum on April 22 by Oscilloscope. I can't post a review until the film's NC release, but until then, here's the film's trailer:

brett said…
Though I usually don't like tearjerker dramas, I'm starting to look forward to this. The trailer has definitely gotten me excited. Also way happy to see that they used “Layers” by Asobi Seksu as the soundtrack to the trailer - such a lush and dreamy tune that fits the mood perfectly.

You can check out the trailer at : http://displacedbrett.wordpress.com/2009/04/23/asobi-seksu-in-treeless-mountains-trailer/
7:52 PM