Of all the films I saw and reviewed for the RiverRun International Film Festival, there was one I did not get a chance to see. This has since been rectified, and even though the festival concludes today, I found the film so extraordinary that I had to give it its due. 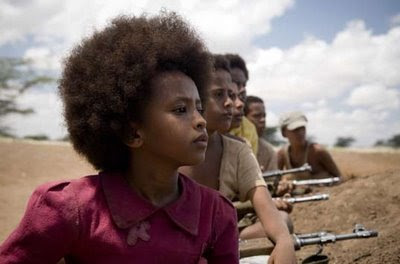 Luigi Falorni's Heart of Fire is a superbly crafted sucker punch of a film that chronicles a little girl's radicalization after being forced into a rebel army in Eritrea. The film is not only an examination of a little known fight for independence from Ethiopia, but of two warring factions fighting amongst themselves over who are the true Eritrean freedom fighters. As brother turns against brother and the prospect of independence seems like more and more of an impossible dream, little Awet (magnetic newcomer Letekidan Micael) gets a violent and eye opening education into human nature, with only a little prayer card with the Virgin Mary's heart of fire to give her strength. Falorni, whose last film was the enthralling documentary, The Story of the Weeping Camel, has established himself as a sharp and compelling up and comer.

The film does not currently have a US release date, but here is the film's German trailer to give you a small taste: