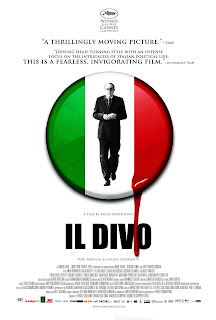 When I first saw Paolo Sorrentino's Il Divo, I honestly didn't know what to think. It's a lot to take in with just one viewing, and it was at the end of a long day of movie watching (actually in the wee hours of the morning), so I was admittedly tired and probably not giving it my full attention.

So I decided to give it another shot. And I was shocked to see just how different my reaction was the second time around. Instead of the convoluted narrative I saw the first time, I saw something close to brilliant.

Il Divo is still quite complex, but the key is not to fret about trying too hard to keep up with who's who and what political game is being played at any given moment. Sorrentino isn't as interested in history as he is in creating what is essentially a character piece, whose goal is not to depict every fact, but to capture the character's essence.

The character in question here is Giulio Andreotti (Toni Servillo), seven term Prime Minister and leader of the powerful Christian Democrat party, that ruled Italy from the end of WWII until the 1990s. 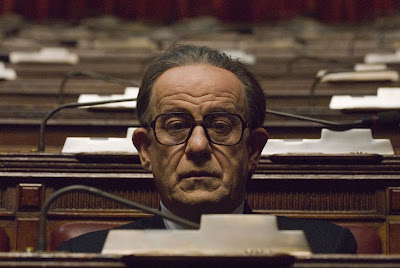 A feared and enigmatic figure, Andreotti's career was mysteriously followed by a series of convenient deaths that always seemed to be blamed on someone else. But as his seventh government begins, Andreotti is riding high, seemingly untouchable. So he sets his sights on what is to be the crowning achievement of his career; being elected President of the Republic. But his government finds himself in turmoil when one of its key members leaves in disgust, and the violent murder of government prosecutor Giovanni Falcone throws the Italian parliament into chaos. From there, Andreotti finds himself subject to a humiliating political defeat, and a government investigation into possible mafia ties.

Trying to keep up with all the political intricacies of Il Divo, however, is an exercise in futility, especially to someone totally unfamiliar with Italian politics. It may all seem a bit overwhelming at times, but the details are ultimately beside the point. Il Divo is a film of textures and feelings, a multi-layered thing that continues to reward the viewer with hidden riches upon each viewing.

There are some who would say that a film is meant to be watched once, but, all due respect to Pauline Kael, I'm not so sure I agree with that. Yes a film should work on its own merits, but I think to truly appreciate a film like Il Divo, one must dig a little beneath the surface. One problem I've always had with mob movies, is that often there are so many characters and hidden allegiances and things going on behind the scenes that it's often hard to keep up with, especially if there are so many characters that they aren't given time to fully develop (all of which were problems I had with Matteo Garrone's much balleyhooed Gomorrah). To some degree that trend continues here, but this time it seems to only add to the sense of discovery in subsequent viewings. 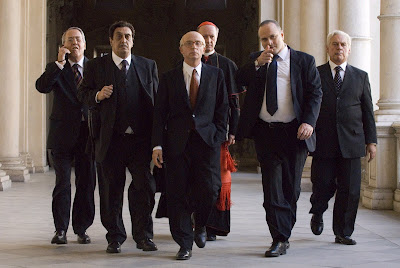 Sorrentino's camera, with the aid of cinematographer Luca Bigazzi, almost seems alive. Each shot is exquisitely framed, and filmed with such an exciting verve that may be artificial, but it never feels dishonest. Sorrentino is more interested in capturing feelings and essences, and the eclectic soundtrack, which features everything from classical (Fauré's Pavane Op. 50 for Orchestra and Chorus is used to an especially haunting effect) to modern rock, gives the film an unmistakably contemporary but strangely timeless atmosphere. Il Divo is an extremely stylish film, but don't be fooled into thinking that it is all flash and no substance. Often, the style is the substance, creating feelings and moods that range from disturbing to sublime.

Holding it all together is Toni Servillo's extraordinary performance as Andreotti. With his stiff, slightly hunched posture, his square shoulders and droopy ears, his Andreotti almost seems like a cross between Bilbo Baggins and Nosferatu, strangely benign but unapproachable, cold, unreadable, and ultimately intimidating in a strangely unassuming way. For all of Il Divo's aesthetic power, it is his small gestures, the glances and ticks, that make it really come to life. He makes an inhuman character human in the center of a complex and visually stunning narrative, whose parts are always just on the verge of overwhelming the others; yet thanks to Sorrentino's sure hand, all somehow come together in the end. It's admittedly a very strange and unique mix, but sometimes the best dishes are made from the most unlikely ingredients.

Sam Juliano said…
Looks like it's worth it just for Servillo's performance! Well, i like Pauline Kael a lot, but I also do not agree with that one-viewing adage. Sheeeesh! I saw FAR FROM HEAVEN 22 times in the theatre in 2002! I know all about Andreotti, and I look forward to the film. You have again penned a most insightful review here!
8:11 PM