Review: "Shall We Kiss?" 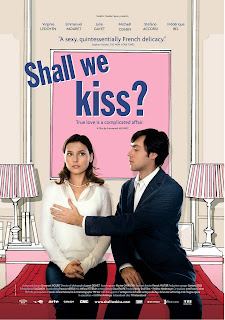 Emmanuel Mouret's Shall We Kiss? starts off as a pretty typical romantic comedy. Émilie (Julie Gayet) and Gabriel (Michaël Cohen) meet cute on a sidewalk one evening while Émilie is looking for a cab. After Gabriel offers her a ride, the two spend a romantic evening together. But when Gabriel tries to kiss her goodbye, she stops him, even though she wants to.

Confused and taken aback, Gabriel asks her why. And that is where Shall We Kiss? veers away from your run of the mill romantic comedy.

It turns out Émilie has a story to tell of two best friends, Judith (Virginie Ledoyen), and Nicholas (Nicolas) whose lives are changed by a kiss that is supposed to have no consequences.

Judith is happily married, and Nicholas is unlucky in love. Both have been best friends for years, but never with any romantic overtones. That is until Nicholas' sexual frustration becomes more than he can bear, and he asks Judith to have sex with him just once so he can satiate his needs. 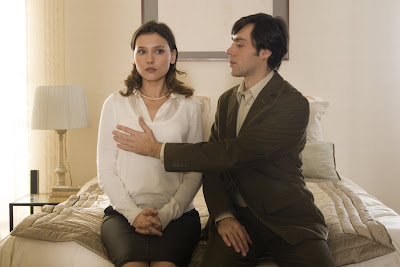 Judith agrees, and their first sexual encounter is almost painfully awkward. But it gets the job done and the two go on about their business as if nothing ever happened. Well, that's the plan anyway. Naturally, that's not exactly how it goes. Judith and Nicholas can't get that first encounter out of their minds. Deciding it must be a fluke, they decide to have sex again to prove that it wasn't actually any good and that they had imagined the whole thing. This, of course, leads to even more sex, and before they know it, Judith and Nicholas are head over heels in love.

But the problem is that Judith is married and Nicholas now in a steady relationship. Both are happy and neither wants to hurt their significant others. So they devise a series of elaborate schemes to find their lovers someone else so that they may be happy, to hilarious and poignant results. 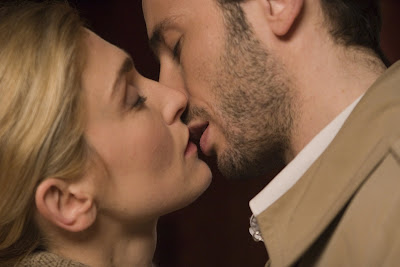 That's what sets Shall We Kiss? apart from the competition. Of course, being a French comedy, it's light, fluffy, and incredibly sexy, but Mouret doesn't ignore the emotional ramifications of his characters actions. Often in films such as this the jilted others are either jerks or totally forgotten about, but here Mouret brings that conflict front and center. That is why Émilie will not kiss Gabriel, she knows of the consequences of a seemingly meaningless kiss.

Eventually, everything comes full circle and Shall We Kiss? becomes the effortless, and surprisingly perceptive, charmer it was always meant to be, but more so than other films of this type, it dares to explore deeper, and dare I say darker, questions than most of its romantic comedy counterparts. Shall We Kiss? positively crackles with lively French wit and captivating romance .

Sam C. Mac said…
I'll have to check this one out I guess. It looked sort of like a Christophe Honore flick-- like "Love Songs" minus the musical angle.