Speaking as someone who is not a sports fan and who doesn't care for boxing at all, I knew nothing of Mike Tyson beyond his infamous reputation as the guy who bit Evander Holyfield's ear before seeing James Toback's compelling documentary, Tyson (Sony Pictures Classics, 4.24). 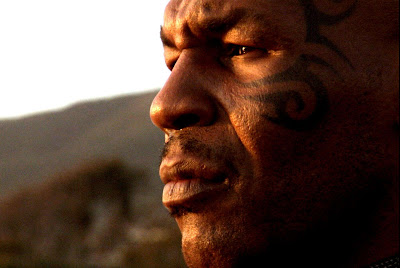 So naturally, the film was nothing like what I expected. Mike Tyson is an astonishingly eloquent and self aware speaker, reflecting on the ups and downs of his career with startling candor, revealing a heretofore unseen vulnerability and even wisdom. Tyson is a raw, revelatory piece of work that will open eyes and possibly change some minds about one of the sports world's most notorious bad boys. Sony Pictures Classics will open the film on April 24 in limited release.

Check out the film's trailer here:

Sam Juliano said…
You are quite right, this is an altogether riveting trailer. And although my taste is with yours in not connecting all that much with sports films, especially boxing, this one could end up in the winner's circle.
4:28 PM

Matthew Lucas said…
It's one of the best documentaries of the year, and I recommend it to everyone.
7:02 PM