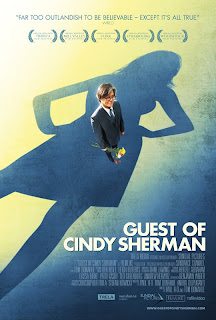 I've always been a bit curious about how the non-famous significant others feel about always living in their shadow. Oftentimes of course, the spouse/lover becomes famous by default. But sometimes that's just not the case.

Meet one of those exceptions - Paul Hasegawa-Overacker, or Paul H-O, as he likes to be called. Paul was the host of a scrappy public access TV show called Gallery Beat, that covered the New York art world scene from 1993 to 2002 with a trademark irreverence toward what he saw as a self important and elitist cabal.

His new documentary, Guest of Cindy Sherman, co-directed by Tom Donahue, begins as a behind the scenes look at NY art culture as seen through the eyes of the ultimate outsider. It's interesting to see the varying degrees of reactions that he is met with, from bemused, to annoyed, to outright hostile (Julian Schnabel gives H-O a particularly harsh dressing down at one point), as the self described "Beavis and Butthead of the art world" take on NYC galleries and some of the biggest names in art at the time. 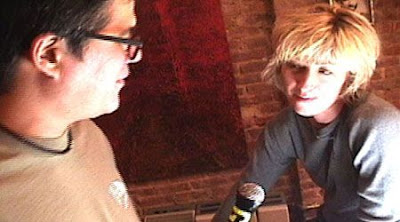 But the holy grail of all these was Cindy Sherman, the enigmatic and notoriously reclusive artist known for her ability to transform into nearly anyone in her photographs of herself. In a complete stroke of luck, Sherman had seen Gallery Beat on TV, and agreed to meet with Paul because she found him interesting. Their first encounter is both mutually flirtatious and uncomfortable, with Sherman visibly out of her element but clearly enjoying herself. The first interview led to more interviews, with Paul scoring an incredibly rare in-studio interview,and the chance to watch Sherman create her latest project. It is such an intimate setting and such a private process that the audience almost feels as if it is intruding, but such is the charm of Guest of Cindy Sherman.

Their time together leads to a relationship, and soon Paul finds himself swept away from his outsider status to the arm of the art world's reigning queen, known for hobnobbing with the likes of Steve Martin and Madonna. But after nearly six years of dating, Paul begins to feel the pressure of having a famous girlfriend, a realization that comes to a head after he is seated far away from her at a prestigious dinner, with a place card that merely reads, "guest of Cindy Sherman." It soon became clear that he would always just be "the boyfriend," and not an actual person, to everyone but Cindy herself.

Although Sherman has since disowned the film, and apologized to all her friends who participated with it, it was initially begun back in 2003 with her full cooperation, while the relationship was still going on. As such, Guest of Cindy Sherman is not a hit-piece by a jilted ex-boyfriend. Instead it's a candid, engrossing backstage pass to an artist's inner sanctum, that raises lots of burning questions along the way. Some wonder if Paul's jealousy of Sherman's fame doesn't stem from some kind of deep-seeded macho need to be the big person in the relationship. Paul himself admits that his concerns and annoyances are silly, but they cannot be ignored. There are lots of gender politics to be explored here - is it OK for a woman to have a famous husband, but not vice versa? 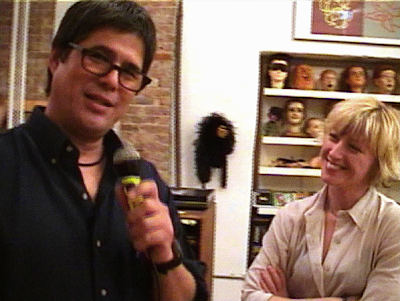 To his credit, Paul does not skirt those questions, he faces them head on, opening himself up for grillings by some of Sherman's friends, and a pair of incredulous, feminist radio hosts. He even goes on to interview David Furnish, husband of Elton John, about the pressures of being married to an icon.

As for Sherman, she is never seen outside of the archival footage from Gallery Beat and her artwork. She remains shrouded in mystery, just as unreachable as she began. Even with Paul's informal interviews, Sherman is still a carefully crafted enigma. But that is as it should be, I think. While Guest of Cindy Sherman is a revealing look at the art culture at the end of the 20th century from a decidedly unorthodox and personal point of view, there is still something undeniably reverent about the way Paul paints Sherman. While all he may ever be is a guest of Cindy Sherman, he has made quite an impression himself with this film, as both an outsider looking in, an insider looking out, and ultimately as someone who doesn't quite fit into either place.

Paul H-O said…
Thanks for the review. It's fair and balanced - and ever so refreshing. (more like Orangina!)
I have sincerity issues, but your piece deserves a genuine thanks for pointing to aspects others hadn't thought of.
Paul H-O
11:37 AM

Sam Juliano said…
A most intriguing film, and a penetrating review of it. It adds yet another on a long list of flicks that haven't been negotiated yet. It's interesting to note that Sherman has disowned the film now, despite the earlier backing. Well, I need to see this and another documentary about the musical A CHORUS LINE, perhaps over the next week.
1:47 PM

Matthew Lucas said…
Wow, thanks so much for stopping by, Paul! I'm glad you liked the review. I always enjoy documentaries that open me up to worlds I've never seen before.

Sam, I think you would enjoy this. If I'm not mistaken it's still playing in NYC. I look forward to hearing your thoughts.
4:35 PM