iTunes once again has the five Best Live Action Short Film Oscar nominees available for download, and I have officially changed my mind about who should win the award. 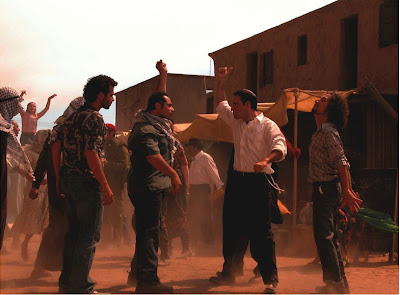 Binta and the Great Idea is a sweet, endearing little film, but West Bank Story is a gleefully subversive, unabashedly un-PC musical satire on the Palestinian/Israeli conflict, told as a take-off on West Side Story. It follows a Palestinian woman and an Israeli man who fall in love despite their families' warring fast food establishments, Kosher King and Hummus Hut. It's hilarious, biting, and yes, charming.

I still predict that it will win the Oscar, but now I can say that it should.
Email Post