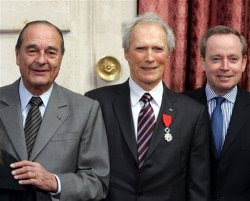 Hollywood star Clint Eastwood has been presented with the highest civilian distinction in France, Legion d'honneur, at a ceremony in Paris.

President Jacques Chirac told the 76-year-old - known for films such as Dirty Harry - that he embodied "the best of Hollywood".

He also paid tribute to Eastwood's "immense talent as an actor" and "genius as a director". And the actor occupied an "exceptional place" in the world of cinema, he said.

Eastwood's latest work as a director, Letters From Iwo Jima, has four Oscar nominations, and received its European premiere in Berlin last week.

It tells the story of the bloody Battle of Iwo Jima, in 1945, from the perspective of Japanese forces.

It is a Japanese-language companion piece to the director's other film of 2006, Flags of Our Fathers, which tells the story from the US perspective.