Could Leo win for "Blood Diamond?" 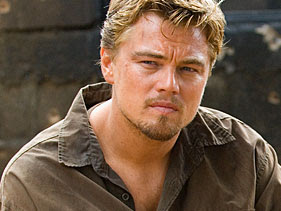 "I don't care if it's the 'wrong' movie! I voted for Leo anyway!" an indignant Oscar voter fumed the other day.

That's turning out to be a commonly held view. While trotting around Hollywood chatting up lots of academy members, I'm hearing LOTS of votes for Leo DiCaprio — and, of course, Peter O'Toole and Forest Whitaker. But let's stay focused on the Leo scenario. For months Oscarlogists have been slamming Warner Bros. for hyping Leo's chances for "Blood Diamond," insisting that the studio was losing Leo an Oscar while failing to properly push his truly worthy work in "The Departed," which Warner Bros. also produced. It's true that Leo gave a more impressive turn in "Departed," but he has less screen time, so the studio pushed him down into supporting for that role when category declarations had to be made for the Screen Actors Guild in November. Surely, studio exex secretly hoped for one of those Jamie Foxx/ Holly Hunter combos — resulting in two nominations in one year.

The problem with that plan, as many kudos observers pointed out, was that, when stars score dual bids, they tend to win for the lead one and "Blood Diamond" isn't, they posited, the stuff of Oscars. It's a showy role because Leo slices off three thick inches of ham parading as a South African accent and manages to keep it on his plate for, well, most of the movie anyway, but there isn't much real fat on the role. The movie is a thriller. Those rarely win Oscars. But there is a notable exception to the Dual Bid Rule: Jessica Lange won in the supporting slot for "Tootsie" when she was also nommed in lead for "Frances."

That would certainly be interesting (and unexpected). Could voters see a vote for Leo as a de facto vote for The Departed? If he does indeed win, then that will be the final signal that The Departed has Best Picture in the bag. Very few people that I know of actually think Leo should have been nominated for Blood Diamond instead of The Departed...voting for him anyway could be a show of support for Leo's good work this year, but more for Departed than Diamond, which is the Best Picture nominee and most well receieved of the two performances.
I don't think it will happen. But I'm not saying it couldn't. If the Academy loves The Departed (and I mean REALLY loves it), then that could carry Leo's Blood Diamond perf to victory.
Email Post