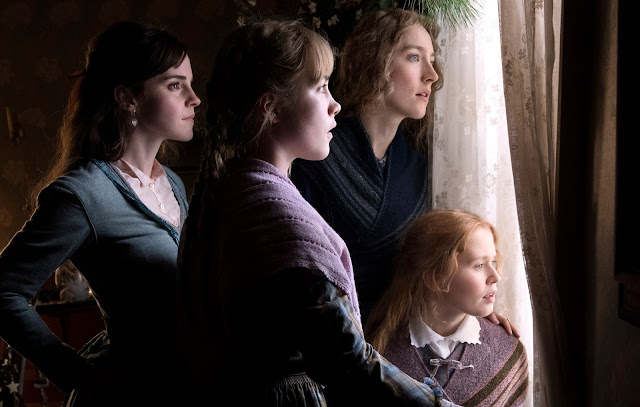 Louisa May Alcott's "Little Women" is one of those oft-told classic tales that continues to be embraced by generation after generation. Like "A Christmas Carol," it has been the subject of numerous cinematic iterations over the years. A quick IMDB search yields at least 23 results ranging from big screen adaptations to TV miniseries based on the book, with three being released just in the last three years. 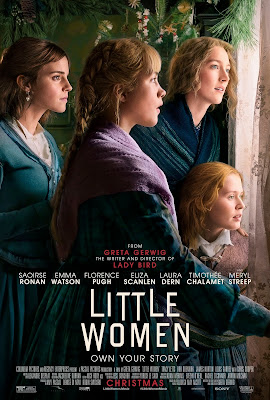 So what's the point of going down this well-trod path again? Greta Gerwig, whose 2017 film, Lady Bird, became a breakout Oscar-nominated hit, manages to breathe new life into the tale of the four March sisters - Jo (Saoirse Ronan), Meg (Emma Watson), Amy (Florence Pugh), and Beth (Eliza Scanlen), without re-inventing the wheel. What she does instead is reframe the narrative into a non-linear structure that juxtaposes Jo's adventures in New York, Meg's marital woes, and Amy's sojourn in France with their childhood, integrating their adulthood with the moments from the past that lead them to that point. The resulting structure telegraphs the ending, with Beth's illness becoming a central focal point of the narrative, but it also gives Gerwig a chance to examine who the sisters are as individuals on a deeper level.

This also allows Gerwig to explore the March sisters as career women. Jo wants to be a writer, Beth a pianist, Amy a painter, and Meg dreams of becoming an actress. While the beating heart of the story remains its tale of the bond of sisters and friendships between women, Gerwig's wise and wonderful adaptation allows each of the March sisters to own their own part of the story in the grand narrative. This is especially important to Jo's journey as a writer, as she begins to understand her own worth and assert herself as not only as an author but as the author of her own life - a point driven home by Gerwig's subtle tweaking of Jo's romantic entanglement with Professor Bhaer (Louis Garrel), which seems more in line with her character here. Gerwig's Little Women is at once thoroughly modern and yet defiantly classical, updating Alcott's text for a new generation without undermining the heart of the story or the fundamental integrity of the characters. This new Little Women is unmistakably feminist, yet never feels incongruous to its 19th century setting - beautifully realized by Jacqueline Durran's lovely costumes and the evocative production design by Jess Gonchor that give the film its classic Hollywood feel. Venerable composer Alexandre Desplat also lends a delightful score that balances a sense of childlike whimsy with his knack for writing emotionally grounded melodies. It also expands the role of Chris Cooper's Mr. Laurence, making his connection with Beth and her piano much deeper and ultimately more heartbreaking.

While it may not be an improvement on the independent spirit of Lady Bird, it's still recognizably her work while staying true to its beloved source material. No easy feat, that. While the actresses don't seem quite as young as they're perhaps meant to in the flashback scenes, the performances are so universally excellent that it hardly matters. Ronan is reliably great but the real standout here is Florence Pugh as Amy. Having broken out with strong turns in films like Lady Macbeth and last summer's Midsommar, Pugh has quickly established herself as one of the finest young actresses working today. Buoyed by strong supporting turns by Laura Dern as Marmie, Timotheé Chalemet as Laurie, and Meryl Streep as Aunt March, the cast makes up with of the year's most dynamic ensembles. And yet it's the small moments that linger; Gerwig's seemingly effortless direction combines modern sensibilities with a classical structure in ways that feels both fresh and timeless, teasing new life out of a familiar tale with warmth, wit, and grace.