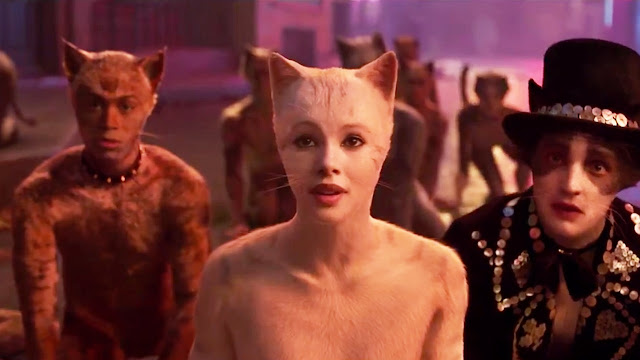 Tom Hooper's Cats is one of those cinematic disasters that will go down in the annals of history as one of the all-time great failures. Based on Andrew Lloyd Webber's Tony-winning 1981 musical, which was for a time the longest running Broadway play in history before it closed in 2000, Cats takes all the problems that plagued Webber's original musical and multiples them tenfold, leaning into the play's essential formlessness and emerging as a garish mishmash of musical styles and horrendously half-finished special effects. 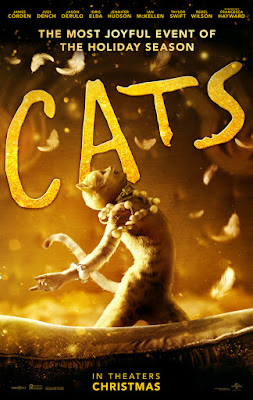 Rarely does one see such a perfect storm of bad material and poor execution. While the original play featured actors dressed in leotards to represent their feline attributes, the film uses CGI to make the actors look like bizarre cat/human hybrids complete with furry bodies, human hands and feet, and whiskers. Yet these features are so inconsistently applied that there seems to be no rhyme or reason to any of it. It's come to light now, of course, that the film was released unfinished, and that a new print is being shipped to theaters with improved special effects this week. And while the hands and feet are distracting, and obviously blurred lines between hands and sleeves look like unrendered test runs for better visual effects, the sloppy animation is one of the least of its problems.

In fact the film's biggest issue is its source material. Filled with grating songs and a thin, nonsensical story, Cats was seemingly doomed before it ever arrived on screen. And yet Hooper, who won an Oscar in 2010 for The King's Speech, seems bound and determined to bury in completely. He fills the film with groan-worthy cat puns, and creates a mise-en-scene so busy that one hardly knows what to look at. Its flashy array of bold colors and swirling camerawork do little to mask the inherent absurdity of the whole affair, with adults prancing around with catlike movements when it suits them that they immediately drop when it doesn't. This is clearly the result of sloppy direction, and one has to wonder how much Hooper was paying attention given just how uneven and inconsistent the production is. The film looks like it was filmed and edited by a group of feral cats high on catnip, and while that may seem like a camp classic in the making, there's nothing fun or entertaining about any of it.

Hooper attempts to imbue the film with a greater sense of emotion than its Broadway counterpart by recording the songs live on set, inviting the actors to sniffle and cry their way through the film's most heartrending numbers (he did the same thing with Les Miserables in 2012). Rather than make the numbers more powerful, however, it actually destroys their tempo and slows the film's momentum to a grinding halt, neutering the film's admittedly terrific signature number, "Memory," doing the usually wonderful Jennifer Hudson no favors and giving her little real emotion to chew on like she had in her Oscar-winning performance in Dreamgirls.

The whole thing is just a mess, a borderline unwatchable mishmash of poorly conceived musical numbers and incoherent storytelling. Not even the talented cast, which includes the likes of Judi Dench, Ian McKellan, and Idris Elba can save the film from under the layers of computer animation. One wants to give everyone the benefit of the doubt here, but this truly feels like a movie with no direction, no leader, no vision - it's an unholy abomination complete with dancing cockroaches and singing mice that, rather than bringing dreams to life, plays out like a nightmarish vision from the pits of cinema hell.