Most films are primarily concerned with action and movement - how characters get from "Point A" to "Point B." Figures moving through space and time, in and out of frame, conducting the business of moving along the plot. 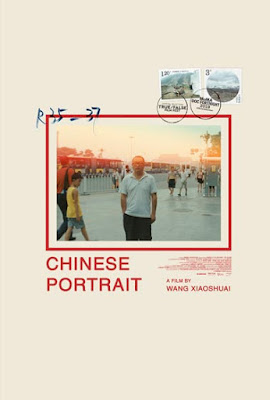 By contrast, Wang Xiaoshuai's documentary, Chinese Portrait, is a movie about waiting, focusing on the seemingly mundane moments between actions that most movies cut around. The film consists of a series of static tableaus set in textile mills, homes, mines, trains, and other everyday locations of Chinese life. By posing the subjects in a kind of cinematic still life, Wang creates a kind of non-reality reality, a snapshot in time that could almost be a still photograph if it weren't for the life continuing on around them. It almost feels like the mirror image of Abbas Kiarostami's 24 Frames, but instead of animating still images, it's freezing real life moments like an insect preserved in amber, a piece of seemingly arbitrary time captured and preserved forever.

But this is no mere exercise in cinematic style, Wang's juxtaposition of scenes of impoverished domesticity with towering gray skyscrapers depict a nation in flux, where dreary cityscapes bump up against rural agricultural labor, vestiges of Chinese tradition against a backdrop of sweeping economic expansion. It's in those caught in-between moments that Wang finds the most truth. China may be marching forward but it is also sliding backwards, creating a kind of stasis borne of an economic system that is leaving untold millions behind. The rich get richer, the poor get poorer, and the nation ultimately goes nowhere - a phenomenon that isn't exactly uniquely Chinese.

And yet there's something undeniably beautiful about what the film manages to capture. Shot over a period of 10 years, we see urban ruin and decay gives way to rebirth, as life moves steadily forward even as progress leaves people behind. Chinese Portrait examines moments of humanity in a rapidly evolving nation, reflecting a remarkably diverse country both economically and religiously - Muslim prayers are even featured prominently despite rising anti-Muslim violence in the country. It's as much a portrait of the nation as it could be as a portrait of the country as it is, offering glimpses of its potential along with with its foibles, and Wang's ability to reflect the nations subtle shifts over the last decade, sometimes returning to agricultural lands now reclaimed as urban sprawl, showcases a filmmaker remarkably in tune with the surroundings of his homeland.

One might expect a film comprised of mostly static tableaus to become tiresome or dull, but as the film progresses it becomes something at once wondrous and revelatory, a dynamic living document of modern China that invites viewers to take in the world around them, to become enveloped by its fluctuating scenarios. The effect is at once riveting and enchanting, a quietly electrifying avant-garde documentary that creates a clear-eyed portrait of our ever-changing world without ever uttering a word.