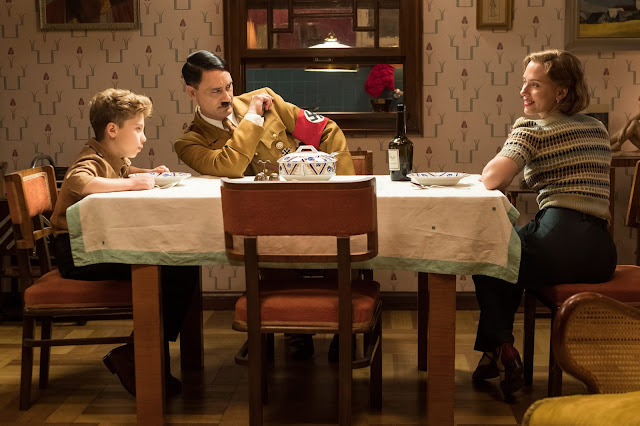 Billed as an "anti-hate satire," Taika Waititi's Jojo Rabbit makes a seemingly rather bold attempt to set a comedy in Germany during the height of WWII. The problem is that its not particularly bold - Jojo Rabbit takes the story of Jojo (Roman Griffith Davis), a young boy whose passion for the Nazi party and the Hitler youth is manifested in his imaginary friend, Adolf Hitler (Taika Waititi). 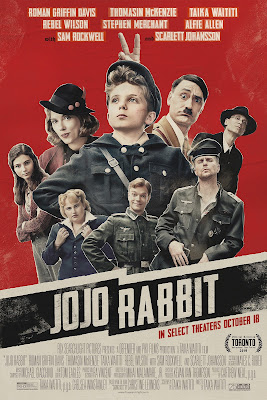 Jojo dreams of joining the army and killing Jews, whom he's taught have teeth and fangs and other outlandish attributes by the disgruntled commandant of his local Hitler Youth chapter (Sam Rockwell, who just keeps getting cast as racists). The problem is that he's small for his age and rather weak, making him a target for the older boys. His mettle is eventually put to the test when he discovers a young Jewish girl (Thomasin McKenzie) hiding in his attic who changes his life forever.

It's certainly tricky territory for a film about the Holocaust, but it's not the first time Hitler has been targeted for laughs. From Walt Disney's Oscar-winning Der Fueher's Face, to Charlie Chaplin's The Great Dictator, to Mel Brooks' The Producers, to the 2015 German film, Look Who's Back, Hitler has been the target of satirists since he was in power. Since fascists thrive on fear hate being laughed at, one of the best ways to rob them of their power is through laughter. Like Harry Potter's boggarts, dressing monsters up as clowns makes them harder to take seriously as human beings. The problem is that Jojo Rabbit neither has the courage of its own convictions or the tonal dexterity to navigate its own tricky waters. It's essentially toothless, neither edgy enough to break new ground or savage enough to leave any real wounds upon the hateful people it targets. Instead, it's a cloying drama dressed up as satire.

Waititi has displayed a unique sense of humor in films like What We Do in the Shadows, Hunt for the Wilderpeople, and Thor: Ragnarok, but he seems out of his element here, doing a Wes Anderson impersonation that ultimately falls flat. In fact, Anderson's own fascist satire, The Grand Budapest Hotel, did a much better job of walking the line between comedy and pathos, something that Jojo Rabbit fails to do, especially as it takes a more serious dramatic turn at the end.

The idea of Hitler as an imaginary friend isn't necessarily offensive, but the film is just too gentle-hearted to land any real punches. With the rise of white nationalism and the return of Nazism to mainstream discourse, turning Nazis into clowns may seem like a good idea on the surface, but Waititi avoids going for the jugular, choosing instead to craft a narrative about a young Nazi boys making friends with a young Jewish girl and learning to let go of his hatred. It's a nice sentiment, but the "why can't we all just get along" message at the heart of this thing feels hopelessly naive. There's something gleefully subversive about the idea of casting a man of color as Hitler, but that's about as radical as it gets, choosing surface level satirical signifiers over anything truly incendiary. It's somehow tasteless and yet not tasteless enough at the same time, it's core message never rising above a pat "Nazis are bad, mmmkay?"

Waititi's wonderfully idiosyncratic sense of humor often gets lost in his struggle to strike just the right tonal balance, ultimately a fool's errand to turn such heavy material into a charming coming-of-age tale that just so happens to feature Nazis. The film certainly has good intentions, but it gets woefully lost somewhere on the road to hell.