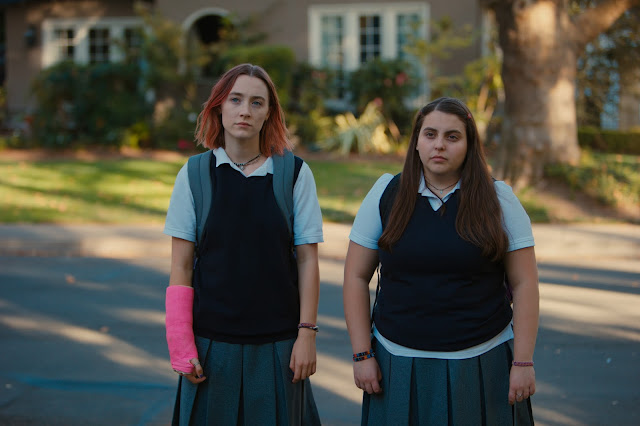 Christine McPherson (Saoirse Ronan) prefers to be called Lady Bird, thank you very much. Because Christine is the name her parents gave her; and parents, as we all know, are clueless. In Lady Bird, Greta Gerwig's wise and wonderful directorial debut, teenage rebellion is commonplace, not necessarily as an act of parental rebuke, but as an assertion of one's own identity.

Lady Bird's parents are not wealthy, yet she goes to an upscale Catholic school in Sacramento where she and her best friend, Julie (Beanie Feldstein) spend their days talking about boys and working on the school play. They're not outcasts, but they're certainly not the cool kids either. That's when Lady Bird meets the handsome and talented Danny (Lucas Hedges), and falls madly in love. His family lives in a nice part of town; and since she is from, as she puts it, "the wrong side of the tracks," she finds herself drawn to his more lavish lifestyle, and begins neglecting her old friends and creating a new persona in an attempt to advance her own social status. 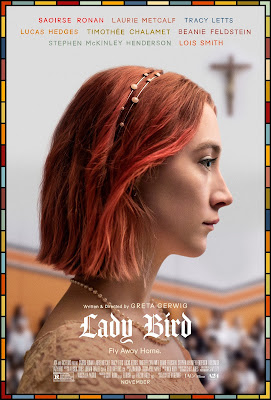 Ashamed of who she is and where she's from, and constantly nagged by her mother (Laurie Metcalf), Lady Bird will do almost anything to get as far away from her family as possible, only applying to schools on the opposite side of the country. But the more she denies who she is and where she comes from, the more she begins to realize that maybe home isn't quite so bad after all.

Coming of age films are nothing new, nor are films in which the main character learns that there's no place like home. But there's just something so honest and real about Gerwig's characters. Set in 2002, Lady Bird is likely to hit very close to home for viewers of my generation who were in high school in the early 2000s, but its themes are universal. Gerwig also displays a keen understanding of how class affects identity, and one's belief in their own potential. Lady Bird's family assumes there's no way she can get into a good college, and they couldn't afford it if she did, so why even entertain the thought? That doesn't make them love her any less, but her parents' practicality clashes her idealism, putting a limit on her dreams through no real fault of their own.

Sharp, disarmingly perceptive, and wickedly funny, Lady Bird is perhaps the most incisive coming of age film since Terry Zwigoff's Ghost World (2001). It is a film of great empathy that seems to have an instinctive grasp of not only what it feels like to grow up in middle America, but what it what it means to be a millennial. Gerwig nails my generation in all its messy, awkward, messed up glory, searching for answers in a world that doesn't seem to care about our problems. And yet there's a deep wisdom in its ultimate acknowledgement that maybe our parents weren't as wrong as we once thought they were. Maybe we don't have everything figured out after all. And maybe they don't either. But the real beauty of Lady Bird is that it doesn't really matter who has the answers, because we're all just trying to figure out this life together.

What Gerwig has achieved here is simply remarkable. Lady Bird is a beautifully performed and smartly written coming-of-age comedy that displays an astonishing mastery of craft and character, exploring the complexities of growing up with intelligence and insight. It's a touching and genuine portrait of millennial unease made with true grace and wit. In a world that consistently denigrates our generation, blaming us for every problem under the sun, Lady Bird treats us with warmth and understanding, while gently admonishing us not to ignore the knowledge of those who came before. That balance, that respect, that striking sense of introspection, is a marvelous thing indeed.