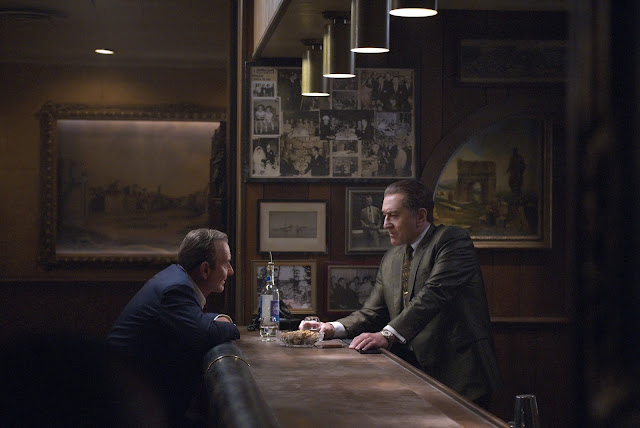 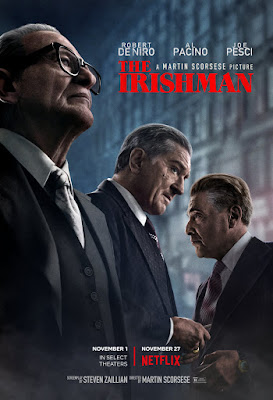 That the film reunites Goodfellas stars De Niro and Pesci (who came out of retirement for the role) is no mistake - The Irishman (or I Heard You Paint Houses as it's labeled in the opening credits) finds Scorsese in a deeply reflective mode, taking account of a long and storied career in his 25th feature film. It's almost as if he's getting the gang back together for one last hurrah, but The Irishman isn't all fun and games, it's a melancholy and mournful epic with the sweep of Visconti and the inner torment of the best of Powell and Pressburger. It's a group of aging legends all facing mortality, and the results are nothing short of electrifying.

Over the course of three and a half hours, The Irishman traces Sheeran's rise from a lowly truck driver to Bufalino's enforcer and right-hand man to Hoffa's best friend and confidant. The film spans decades, beginning with Sheeran as an old man in a nursing home and ending back right where it started, flashing back across the years like the fading recollections of an old man's final confession. It's all framed by a leisurely road trip taken taken by Sheeran, Bufalino, and their wives, slowly winding their way across the countryside toward some unknown destination with a dark purpose known only to Bufalino. The trip is marked by frequent pitstops along the way, much like the film itself, taking its leisurely time winding through the past toward a violent conclusion.

Rather than casting different actors to play the younger versions of characters, such as De Niro playing a young version of Marlon Brando's Vito Corelone in The Godfather Part II, Scorsese employs cutting edge digital technology to de-age the actors, shaving decades off the stars' septuagenarian faces. The technique has been met with some controversy, and there is a certain cognitive dissonance seeing actors we know to be in their 70s suddenly appear to be in their 30s and 40s, but it wears off quickly and never distracts from the story at hand. 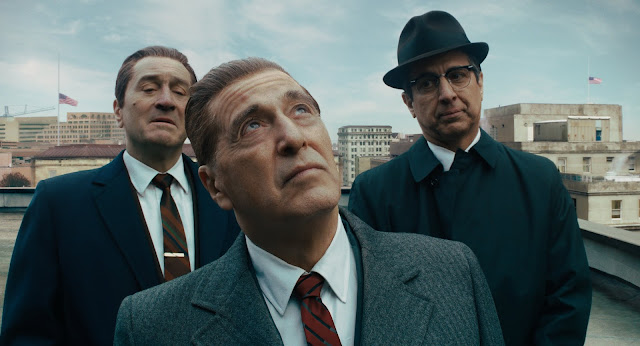 The film's massive length may be a deterrent for some, but it's not without reason. Scorsese takes his time developing Frank's story, allowing the sheer weight of the time passed to weigh on both Frank and the audience. We feel the heaviness of the passing time, but it never feels ponderous thanks to Scorsese's impeccable pacing, aided by his stalwart editor, Thelma Schoonmaker. Scorsese displays supreme confidence in his craft by allowing his story to breathe, the narrative unfolding gradually and deliberately like a great novel unfolding on screen. It allows the characters to build relationships not only with themselves but with the audience, which makes the emotional impact of the film's final act all the more powerful. It is here where The Irishman delves deep, interrogating a man whose life was defined by death at long last facing his own mortality. Scorsese slyly introduces each new character with an onscreen caption describing their eventual untimely death. In the mob, no one gets away clean, so to what does Sheeran owe his unnaturally long (by wise guy standards) life? Here is a man at the end of a long life, his friends long gone, abandoned by his family (Anna Paquin's near-silent role as his estranged daughter speaks more in her silence than any dialogue ever could) taking into account a life of murder and ultimately betrayal, for whom these sins are merely another day at the office.

Scorsese shoots the film's murders with a dry sense of matter-of-factness, characters casually stroll into frame, gun down an unsuspecting victim, then calmly walk out of frame again, leaving the lifeless body to bleed out on the sidewalk. There's nothing glamorous about it, but neither is particularly repulsive - it's just business, nothing personal, and that's what makes it all so disturbing. What kind of effect does a life like that have on a man? That's the question that lies at the film's sorrowful heart. Frank Sheeran spent a lifetime painting houses (a mob term for caring out hits; in other words, decorating walls with blood), while Scorsese has spent a great deal of his career chronicling the lives of men like Frank, men whose lives are defined by those they take, in spite of (or perhaps because of) a strict, but perhaps misguided, moral code. In that regard, The Irishman feels like the summation of a career, a late-period masterpiece that takes into account a life's work. It is perhaps one of Scorsese's most reflective films, a broad-ranging meditation on life, mortality, and betrayal through the eyes of an old man in twilight, all his friends gone in violent ends, facing the end alone. Are we to feel sorry for him? To pity him? Or perhaps mourn the existence of the violent patriarchal power structures he spent a lifetime upholding? What are we to make of such a man? In Scorsese's masterful hands it becomes an American tragedy writ-large, a sweeping portrait of great potential cut down by greed and corruption, and a road to hell paved by the best of intentions. Scorsese, De Niro, Pesci, and Pacino, four lions in winter, all deliver some of the finest work of their respective careers in a film that can only be described as a monument of American cinema.