Few images have the power to create such immediate feelings of fear and anxiety as blue lights flashing in a rearview mirror. While for white people this often means you're going to get an expensive ticket and you might be late for work, for black people it conjures up images of unarmed people of color who have been murdered by police officers for no other crime than driving while black. Black filmmakers understand this and have used that to their advantage in a post-Black Lives Matter world where such issues have received greater cultural attention. Nowhere was it more indelibly employed than in Jordan Peele's Get Out, which utilized the flashing blue lights to create perhaps the film's most memorable scare in a way that gave white audiences a brief taste of that sense of terror that black audiences understood on a much deeper, much more real level. 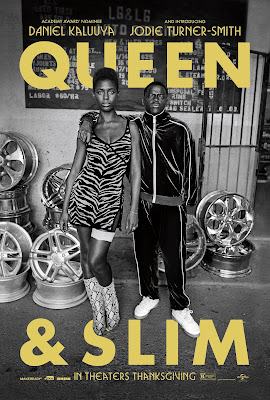 Whereas Peele used that moment to punctuate his film, first-time feature filmmaker Melina Matsoukas opens with it, and where Get Out later revealed it to be a fake-out, in Queen & Slim it is all too real. The film opens with a couple having their first date after matching on Tinder. On their way home, Queen (Jodie Turner-Smith) and Slim (Daniel Kaluuya) are pulled over by a belligerent cop for swerving on an empty street due to a playful argument. The situation quickly escalates and the cop shoots Queen in the leg as she's trying to pull her phone out of her pocket to record the altercation, leading Slim to overpower the cop and shoot him with his own gun. And so two perfect strangers find themselves on the run from the law, unlikely heroes in a struggle against systemic oppression.

Like a black Bonnie and Clyde, Queen and Slim head across the countryside, and are elevated to folk hero status, inspiring demonstrations and riots nationwide as the police leave no stone unturned to track them down. Desperately heading for Florida so they can escape to Cuba, Queen and Slim find themselves falling in love, and Matsoukas positions their love story against a canvas of social unrest, where something beautiful is found even in the midst of hatred and oppression - Queen and Slim carry on because they have no other choice.

It's a satisfying inversion of the Bonnie and Clyde story, where the outlaws only become so through an act of self-defense, with Matsoukas displaying supreme confidence in her first feature film (she also directed Beyoncé's stunning visual album, Lemonade). The film does suffer from some structural issues; in one particularly troubling scene police dispatch peaceful demonstrators with tear gas leading to a shocking act of violence that is juxtaposed with the film's protagonists making love in a car.  While Matsoukas clearly wants to find beauty in the darkness, that melodramatic moment seems strangely incongruous with the rest of the film, and it falters when it pulls back from Queen and Slim to show their effect on the world around them. Its most powerful moments come from their own perspective, as they learn of the movement they inspire, and the conflict that causes within them. Are they heroes? Are they outlaws? Or are they something in between?

That inner conflict is what drives Queen & Slim. And despite any structural quibbles one may have with the film, it's hard not to be deeply by such an impassioned howl of grief and anger. It's raw and painful like a fresh wound, you can almost feel the deep-seated weariness of a filmmaker who is purely and simply tired of a world that punishes black people the color of their skin. Matsoukas, working from an incisive screenplay by Lena Waithe, not only explores themes of police violence and "driving while black," it also delves into ideas of the double standards placed on black people in American society, that one has to achieve some sort of perfection in order to be accepted by a predominantly white culture.

It's a damning indictment of white privilege made my a black artist who is fed up because she knows a white couple would never have been put in this situation in the first place. It's a haunting, devastating film, anchored by two incredible lead performances, especially from Jodie Turner-Smith, whose Queen is a fiercely determined lawyer who is through playing nice with structural racism and is ready to assert herself as an independent black woman.  I know the voice of a white male critic on a film like this is perhaps the last thing the world needs, but what the world does need is more films like Queen & Slim y filmmakers like Matsoukas, who are unafraid to bare their hearts and leave their anger and frustration on the screen in electrifying ways. It's a movie about our moment, certainly, but it's less a "ripped from the headlines" issue drama and more of an artfully crafted exorcism, a channelling of hundreds of years of systemic oppression into a blinding and beautiful work of art that feels like throwing a firecracker into a crowd. You can feel the weight and the rage in every frame, boiling over into something at once weary and unsettled, clinging to a shred of hope even when the darkness seems all but inevitable.