In 2016, infamous Fox News chief Roger Ailes was accused by former "Fox and Friends" anchor Gretchen Carlson of sexual harassment. This opened the door to more women coming forward with accusations of their own, eventually leading to Ailes' ouster from the company. 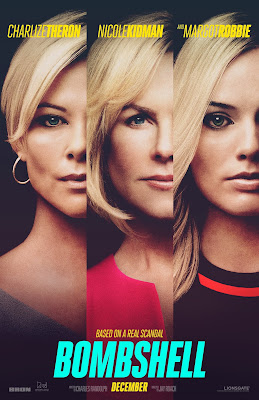 Ailes (John Lithgow) was one of the most powerful people to be brought down by sexual harassment accusations in the days before the #MeToo movement (which wouldn't begin until a year later). The scandal is recreated a Jay Roach's Bombshell, which dramatizes the events leading up to Ailes' ouster from the point of view of Carlson (Nicole Kidman), anchor Megyn Kelly (Charlize Theron), and ambitious Fox employee, Kayla Pospisil (Margot Robbie). Roach is no stranger to ripped-from-the-headlines dramas, having directed Game Change, All the Way, and Recount for HBO over the years. He's also the filmmaker behind Trumbo, a star-studded but messy biopic that featured a star-studded cast portraying the stars of yesteryear.

Bombshell doubles down on many of the issues that plagued Trumbo, in many cases substituting "Saturday Night Live" style caricatures for real people in such a way that distances the audience from the human elements of the story. While the three leads are all uniformly excellent (Theron is especially uncanny as Kelly), appearances by Richard Kind as Rudy Giuliani, Tony Plana as Geraldo Rivera, and Kevin Dorff as Bill O'Reilly are all cringe-inducing parodies that seem like they belong in a different film. There comes a point when filmmakers need to let their actors do their work and trust that the audience will go along with them rather than hold their hands and try to make everyone look exactly like their real-life counterpart (that the real-life people are sometimes seen in stock footage doesn't help the comparison). A Beautiful Day in the Neighborhood is a terrific recent example of how to do this right. Tom Hanks never particularly looks like Mr. Rogers, but he captures his essence so thoroughly that we never question it. Why, then, does Bombshell feel the need to parade a series of actors in ghoulish makeup and ridiculous wigs to make us recognize who they are? They're already flashing subtitles across the screen at the appearance of every recognizable character - Roach is attempting to do all the heavy-lifting for us and the results are remarkably shallow.

There are also much thornier issues at play here that Roach seems unwilling to explore. While there's no doubt that these women were victims, they were also willing participants in the culture of fear, racism, and misinformation that the film lampoons but never really interrogates. We see Kelly make her infamous "Jesus was white" statement, and Kate McKinnon pops up to explain how Fox operates as a machine built on terrifying older viewers with minority boogeymen, but the entity of Fox News as we know it is almost treated like a joke, its insidious influence on the culture at large mostly swept under the rug. That might be due to the fact that it complicates the heroic image of Carlson and Kelly that the film is trying to concoct. They may be the heroes of this story, but they are villains in another, wholly complicit in Ailes' bigoted social engineering experiment as they fight for a justice for themselves that they never afforded the marginalized communities they helped demonize on a grand scale.


I don't want their stories swept under the rug, or the bravery of coming forward and speaking up to be ignored, but I can't help but think that Bombshell does its story a grave disservice by making light of the larger issues at play at Fox News. The legacy of Megyn Kelly and Gretchen Carlson is not simply as feminist heroes who brought down a creep (the word feminist is tossed around in the film as a pejorative term that no woman wants anything to do with) and ended a toxic workplace culture. Or did they? Ailes may be gone, and with him the idea of the "casting couch," but has Fox really changed? Of course they haven't, it remains a bastion of white supremacy, sexism, and distorted truth on a staggering scale that hasn't gotten any better because the women on air are no longer forced to wear short skirts. It's that legacy, to which Carlson and Kelly are irrevocably tied, that Bombshell seems content to ignore, using the network's well known biases as fodder for cheap laughs aimed directly at the choir rather than an invitation to dig deeper into a messy story with no end in sight.

One day I'm sure there will be a film that will be the definitive portrait of the irrevocable damage done to our country by Fox News and its acolytes. But Bombshell isn't it. Because as it rightly points out (in a different context), anyone who has ever worked there will always be associated it. While it takes great courage to stand up to powerful men, and to the culture of a workplace whose values you inherently share, Bombshell takes a timid approach to exploring its protagonists role within, instead content to awkwardly play the parody in ways that are funny for all the wrong reasons.