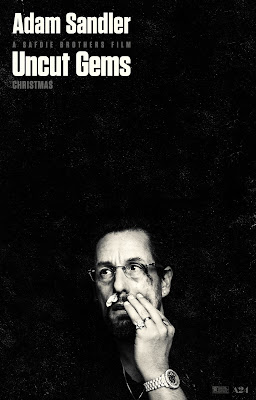 Adam Sandler delivers one of the most electrifying performances of his career as Howard Ratner, a Brooklyn jeweler with an affinity for stretching the truth who never saw a side hustle he couldn't run with. After purchasing a rare African black opal from a black market dealer, Rather stands poised to make the deal of his life, auctioning off the precious gem for millions of dollars at Sotheby's. But when he loans the opal to NBA player Kevin Garnett as a good luck charm in exchange for Garnett's championship ring (which he immediately pawns to pay back some loan sharks), it sets off a chain of increasingly unfortunate events as Ratner tries to excavate himself from one mess by creating another, until he's in so deep that there may be no escape.

The Safdies have proven themselves to be masters of making an audience uncomfortable, and in Uncut Gems they really take it to the next level. While the film itself never quite matches the drug addled verve of Good Time  the comedy of errors that befalls Ratner becomes so outlandish that would almost be funny if it weren't so maddening. Therein lies the genius of what the Safdies have achieved here. They make us care about Ratner even though his misfortunes are his own creation. He's a habitual loser who can't help but take unnecessary risks that almost always end in disaster, but he just keeps trying, hoping one day he will strike it big. Sandler's unique brand of goofball charm is perfect here, and you can understand how people buy into his assurances that "I'll have your money tomorrow," even though we know that he knows that he probably won't. He's a born hustler, and his scheming has finally caught up with him.

Uncut Gems is a masterclass in tension building. The film is an assault on the senses almost from the opening frame, with the swirling, seductive colors of the opal blending with Daniel Lopatin's cacophonous score layered on top of overlapping dialogue to create a heightened sense of disorienting chaos that reflects Ratner's own scattershot state of mind. This has the effect of both repelling and engaging the audience, and editors Benny Safdie and Ronald Bronstein wind our nerves without employing the kind of quick-cut rhythms that one might expect. It's a film that's never quite as fast-paced as it feels, because it's constantly adding layers of tension on top of each other. There's a kind of kinetic, propulsive energy that drives it all forward, but the Safdies aren't employing typical cinematic signifiers to create that.  It's structured like a Jenga tower being deconstructed; each new failed hustle is a block removed from the tower and we're just waiting for it to come crashing down. The Safdies have designed Uncut Gems with knife's edge precision to tear audiences' nerves to shreds, and the results are as gripping as they are exhausting.