With the release of Star Wars Episode IX: The Rise of Skywalker, Disney is bringing to a close the Skywalker saga that began with 1977's Star Wars over 40 years ago. This marks the conclusion of the third Star Wars trilogy, taking place decades after the end of 1983's Return of the Jedi  that began with J.J. Abrams' The Force Awakens (2015), a solidly entertaining film that nevertheless hewed perhaps a bit too closely to the series' established narrative tropes. 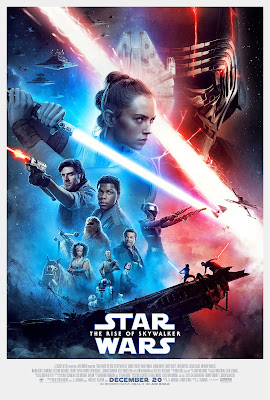 Then came Rian Johnson's The Last Jedi (2017), a film that boldly reinvented Star Wars mythology in new and exciting ways, and laid the groundwork for exploring uncharted territory within the Star Wars universe. But that film caused quite a bit of controversy in certain circles of Star Wars fandom, so for the trilogy's final film, The Rise of Skywalker, director J.J. Abrams returned to wrap the fans in a cozy blanket of familiarity, throwing in everything but the kitchen sink to remind nostalgic fans of the classic films they loved as children.

And therein lies the biggest problem with The Rise of Skywalker; it's a naked exercise in retrograde nostalgia that is perfectly content with playing the hits but fails to provide anything new or exciting. In The Last Jedi  Star Wars felt alive again in ways it had not since creator George Lucas sold the franchise to Disney. While the dialogue of his much-maligned prequel series left much to be desired, Lucas' ability to realize strange new worlds onscreen was nearly unparalleled, and his vision is sorely missing in Abrams' entries in the series. Lucas, of course, also ran afoul of his own fans with the prequels, but Lucas understood that giving fans exactly what they want doesn't exactly make for exciting filmmaking if all they want is what they've already seen.

The Star Wars films have always reflected each other, recalling events from previous films in what Lucas often referred to as "rhyming." But rather than rhyming with its predecessors, The Rise of Skywalker just blindly copies them, matching Return of the Jedi nearly beat-for-beat, with bigger space battles and more lightsaber duels. I don't go to films to see what I want to see - I go to be surprised, to see things I didn't know I wanted to see. I want filmmakers to expand beyond the limits of my imagination, but that's not what this film is here to do. It's here to hold your hand, to comfort you, to nudge you and say "hey remember that guy? Hey there's that planet you remember from that other movie you like!" while John Williams' grand score reprises familiar themes ad nauseam in all the expected ways. It lacks curiosity and ingenuity, never expanding beyond its own self-imposed boundaries. The new Disney+ series, The Mandalorian, has a broader scope and more fully realized mythology.

Abrams also undercuts one of The Last Jedi s most interesting ideas, that Jedi heroine Rey (Daisy Ridley) is actually the child of a couple of nobodies, washing away the "noble bloodline" idea of the Force and democratizing it as something whose potential lies in everyone. By revealing her parentage (a plot point I will not reveal here), Abrams demythologizes the mystery of the Force and makes the Star Wars galaxy feel frustratingly small. Every person of any talent has to be the child of somebody special in this universe, and that's a disappointing message to lie at the core of something that has inspired millions of children for generations.

All the elements of a great Star Wars movie are here; epic space battles, kooky new creatures, exotic planets, but there's almost too much going on. The film opens in high gear and never takes any time to breathe, lurching from set piece to set piece so quickly one feels as if they have whiplash by the end. Abrams is attempting to tie up so many loose ends and explain so many things from the previous films (while also making up a whole lot of new convoluted plot elements) that it becomes painfully clear that they’ve been making all this up as they go along with no overarching vision. The whole thing seems rushed and scattershot, never congealing into a satisfying film on its own. And while it attempts to bring a sense of finality, its complete lack of any real stakes leave one to wonder if this really is the end.

The theme of The Last Jedi was to let the past die. In The Rise of Skywalker the past gets resurrected and zombified to the point that we kind of feel like we're watching Star Wars, but it also feels like some sort of direct-to-video knock off with a really, really big budget. There are individual elements that work, a few nice cameos and some lovely character moments buried within the bombast, but it leaves one feeling overstimulated and exhausted by the end, filled with little more than empty calories. Gone is George Lucas' impressive sense of world-building and Rian Johnson's elegant and inventive storytelling, in its place is a Frankenstein's monster of older films that remind us of the glory days in all the wrong ways, because instead of feeling that warm and fuzzy glow of visiting old friends, we can't help but remember how much better the films that came before it really were. Perhaps they really should have just let the past die.