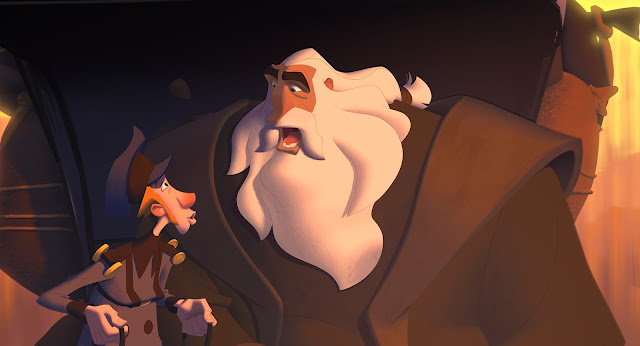 Sergio Pablos' new animated wonder, Klaus, feels like a film from another time, a gorgeous hand-drawn work of art that recalls everything from the Disney renaissance of the 1990s to the darkly beautiful work collaborations between Don Bluth and Steven Spielberg of the 1980s. 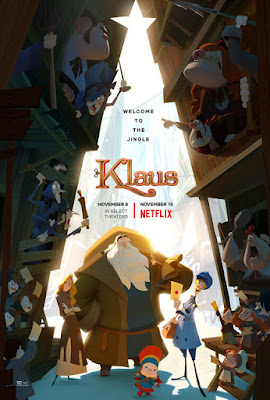 Klaus re-imagines the Santa Claus myth as the story of a spoiled young brat names Jesper (Jason Schwartzman) who gets banished by his father, the wealthy owner of a lucrative mail company, to be the postmaster of a remote Arctic island called Smeerensburg. Hoping it will teach the young man maturity, the father tells him that he must deliver 6,000 letters within a year or be cut-off from all financial support. Upon arrival in Smeerensburg, Jesper discovers that the grim, depressing island is populated with miserable people who never send letters because they're in constant feuds that are so ancient they no longer remember what they're fighting about.

Dejected, Jesper begins to wonder if he will ever return home to his luxurious ways - that is until he meets Klaus (J.K. Simmons), a reclusive woodsman with a house full of toys. After helping Klaus deliver a toy to a lonely young boy, Jesper concocts a plan, and soon he has every child on the island writing letters to Klaus for toys. But while Jesper is just hoping to meet his quota, his actions have the unintended consequences of bringing joy to the island's children, and in turn their parents, whose newfound happiness begins to melt old grudges and unite warring families, much to the chagrin of the village elders, who want to maintain the status quo at all costs.

The film hits a lot of familiar story beats - Jesper's true motives are, of course, revealed to Klaus and all his newfound friends, even after he has forgotten about his quota and is genuinely come to love them. But Pablos creates such an indelible world and handles the story arc with such grace that it hardly matters. The characters are so lovingly drawn, the landscapes so breathtaking in their idiosyncratic detail, that Klaus often feels like we're truly watching a myth being born. This unique take on the origins of Santa Claus examines the jolly old elf not so much as a literal person with magical powers, but as an idea of the spirit of giving, a fact that will likely go over many young heads but will hit adults square in the heart. This is the kind of animated film studios so rarely make anymore, a uniquely designed original story with a heart a mile wide.

It's almost a shame it's not getting a wider theatrical release, but thanks to Netflix it's available in every living room in the country just in time for Christmas. Klaus feels like a new holiday classic, a fresh new take on an ancient legend that finds new life in these hand-drawn images that gives Santa an origin story as heartbreaking as anything in Disney/Pixar's Up. You'll find no ironic pop-culture references here, no arch self-references or pandering humor - this is good old-fashioned storytelling that takes a look an ancient myth through new eyes, and emerges as a thoroughly charming and often quite moving tale of the power of simple kindness. It's a brand new Christmas tradition ready to be discovered.