Over the course of his last five films, Clint Eastwood has been chronicling the stories of real Americans in extraordinary circumstances. From Chris Kyle in American Sniper, to Sully Sullenberger in Sully, to the young soldiers who stopped a terrorist in The 15:17 to Paris, Eastwood's fascination with the resilience and simple heroism of everyday Americans has seemingly become the focus of the octogenarian filmmaker's late career.

In his latest film, Richard Jewell, Eastwood explores the story of the eponymous security guard who discovered the Centennial Park bomb at the 1996 Olympics in Atlanta, and successfully raised the alarm and helped clear the area before becoming the subject of the much-publicized FBI investigation into the attack. Jewell (Paul Walter Hauser) was initially hailed as a hero by the media, before the FBI investigation became national news, turning Jewell's life upside down by painting him as a lone-wolf bomber who was disgruntled over his failed career in law enforcement. 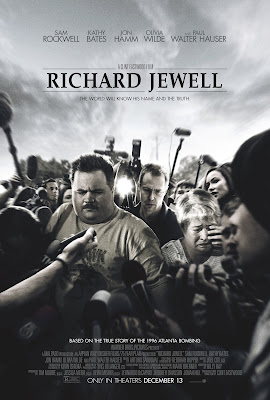 There are several ways to interpret this "innocent white guy railroaded by the federal government and the media" tale. There's the obvious conservative "scapegoating the white man," and then there's the hot-off-the-presses "Trump is innocent and the media and deep state are out to get him" read, which seems like a stretch. Neither of those seem particularly plausible, because despite his appearance at the 2012 Republican Convention where he infamously carried on a conversation with an empty chair, Eastwood is not the conservative polemicist that right-leaning critics wish he was, or that left-leaning critics often accuse him of being.

Placing Eastwood in that sort of left/right binary often oversimplifies what he's really doing. While choosing a white man as the "regular Joe getting screwed over by the system" is certainly a right-wing trope, Eastwood is much too savvy a filmmaker to embrace something so simplistic. What we actually have here is an indictment of a cynical system propped up by both law enforcement and corporate media that ignores humanity in pursuit of ratings and power. That's the world in which Richard Jewell exists, where the story of Richard Jewell the terrorist became more interesting than the story of Richard Jewell the hero, and in order to save face the FBI stuck to its theory despite overwhelming evidence that Jewell could not have possibly committed the crime. It's an exploration of a system that views sincerity as inherently suspicious and past missteps as evidence of present wrongdoing.

Where it falters is in its portrayal of reporter Kathy Scruggs (Olivia Wilde) as a completely unscrupulous villain. The characterization of Scruggs is so cartoonishly evil that if she had a mustache she would certainly be twirling it.  That Eastwood affords her a last minute redemption of sorts that is not given to overzealous FBI agent Tom Shaw (John Hamm) does little to negate the fact that her portrayal carries with it a whiff of misogyny, but it does drive home Eastwood's central point that the real villains here are the FBI and the inability to admit mistakes in order to preserve the veneer of authority. On the plus side, Paul Walter Hauser is a revelation, turning in a truly extraordinary performance that lifts him up into a new realm after playing mostly goofy simpletons in films like I, Tonya and Blackkklansman. Hauser is so compelling as the affable and thoroughly ordinary Jewell, a man whose zeal for doing good sometimes leads him into trouble, that his performance gives the film a complex emotional center. Jewell may not be perfect, but he certainly didn't do this.

In fact, Richard Jewell is perhaps the best-acted film Eastwood has directed in a long time. The filmmaker is known for his breakneck shooting pace and disdain for multiple takes, but here the performances seen so authentic and lived in, especially those of the aforementioned Hauser and Kathy Bates as Jewell's supportive but devastated mother. Bates has a tendency to overdo southern accents, but she's pitch perfect here. It's a film solidly in Eastwood's comfort zone, to be sure, but no one can craft a compelling, straightforward drama quite like he can. His continued exploration of the lives of unassuming, imperfect men who perform heroic acts in moments of great stress and adversity make for a fascinating window into Eastwood's libertarian worldview, where acts of heroism are discounted and ignored by a cynical system that wants a cut of the glory for themselves. Agree with him or not, it's hard to ignore Eastwood's ability to craft riveting drama out of real-life events with an astonishing narrative economy that puts its human elements front and center.