The cinema of Yorgos Lanthimos is something of an acquired taste, dividing audiences into "love its" and "hate its" in almost equal measure. His penchant for using alienating absurdity to uncover societal rot is a symptom of his origins in New Greek Cinema, where he first emerged on the world stage with 2010's Oscar-nominated Dogtooth. 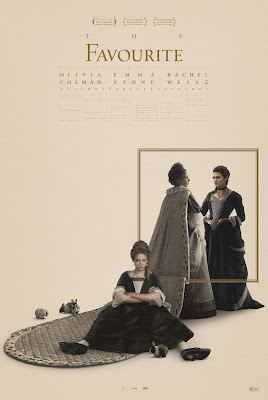 His latest film, The Favourite is something of a departure for the filmmaker, marking the first time he's directed a film that he has not written himself. And yet it also bears the unmistakable hallmarks of his stylistic proclivities. It also finds the filmmaker moving away from the more insular and obfuscating nature of his last two films, The Lobster and The Killing of a Sacred Deer. As a result, The Favourite is perhaps his most accessible film thus far, but that doesn't mean it doesn't have the same depth or visual wit.In fact, it's arguably his finest film to date.

Set in the court of Great Britain's Queen Anne (Olivia Colman) in the early part of the 18th century, The Favourite is a chamber drama that is something of a satire of stuffy chamber dramas, pitting Lady Sarah (Rachel Weiss), right-hand of the weak-willed Queen, against her ambitious servant Abigail (Emma Stone), for the Queen's favor. Both of them recognize that real power is in proximity to power, and like a twisted take on All About Eve set in the world of 18th century British royalty, The Favourite is a deliciously acerbic battle of wills that often teeters on the border of high camp.

Lanthimos' films often have an air of absurdity, and working from a dazzlingly caustic screenplay by Deborah Davis and Tony McNamara, he rakes the aristocracy over the coals with devious aplomb. His frequent use of fish-eye lenses distorts the frame so that the lush costumes and sumptuous set-designs are often off-kilter, taking on a sinister quality that is often belied by the sheer goofiness of the cutthroat situations in which the characters find themselves. Inside the halls of power is pursuit of naked ambition for ambition's sake, where influence and personal power is protected at all costs often at the expense of those outside the palace walls.


The men of the film are also marginalized to the point of non-existence, their own weak attempts at securing a foothold in the court rebuffed with cold indifference. The Favourite belongs to its women, while the oafish men prance around court jockeying for influence, the real power is exchanged between Queen Anne and her consorts, a delightful twist on the historic reality, perhaps, but one that cuts to the bone with its razor-sharp lampooning of masculine preening and outsized egos.

It is that incisive ability to cut through extravagant exteriors to expose the rot within that makes The Favourite such an extraordinary achievement. It's an acidic, nasty, bitter pill that is as outrageously entertaining as it is profoundly unsettling. Davis and McNamara's mischievous screenplay gives its three lead actresses plenty to chew on, and each dives in with voracious relish. It's a high-class soap opera with impish instincts, like a cobra coiled up and ready to strike at a moment's notice - beautiful but deadly. It's the kind of film that cuts deep and then laughs at the wounds it inflicts, blithely refusing to take any prisoners in its devastating mockery of the powerful.