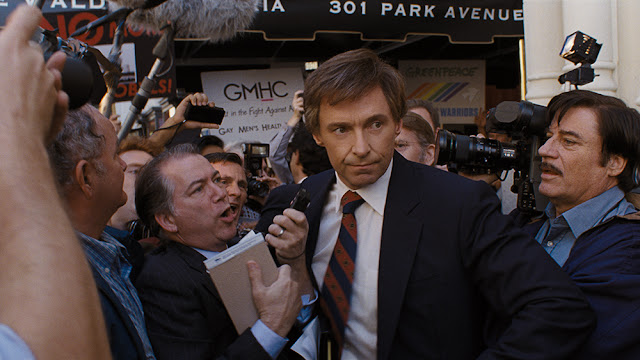 Jason Reitman is no stranger to political satire, having weaved political and social commentary into films like Thank You For Smoking and Up in the Air with some success, and into films like Men, Women, & Children with some measure of ham-fisted awkwardness. Yet his latest film, The Front Runner, is his first to tackle real-life politics head-on, chronicling the unravelling of the Gary Hart presidential campaign in 1988.

Hart (Hugh Jackman), who was running for the 1988 Democratic nomination for president (which eventually went to Michael Dukakis, who went on to lose to George H.W. Bush), was widely considered to be the front-runner to not only win the nomination, but to win the presidency itself. He was a charismatic, forward-thinking progressive who had worked on the McGovern campaign, and wasn't afraid to advocate for big ideas and progressive change after eight years of the still popular Ronald Reagan's presidency. 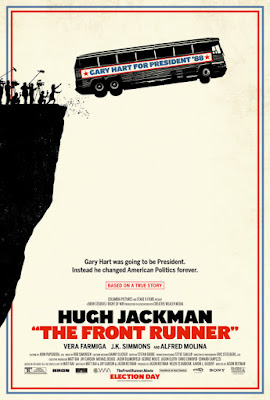 His candidacy was undone, however, by his affair with a campaign staffer, uncovered by reporters from the Miami Harold after Hart dismissively told a reporter inquiring about rumors surrounding his marriage to hire a tail and follow him around, insisting that they would be very bored. The Herald took it as a challenge, and his political career ended up in shambles as a result. Reitman takes Hart's downfall and uses it as a crux for an examination of both journalistic and political ethics in the age of Trump in The Front Runner.

Using Altman-esque overlapping dialogue and a roving camera that evokes Altman's own political 1988 political satire, Tanner '88, The Front Runner attempts to paint an intimate portrait of journalistic ethics and its relationship to power, and the importance of personal integrity in leadership. In the #MeToo era, was Hart simply a man having a consensual relationship outside his marriage, or was he abusing his power? Are the personal lives of our leaders none of our business? Where is the line on what its acceptable for journalists to report? There are so many inherent questions in this story that it's a shame that the result is so staid and dramatically inert.

The moral ambiguity of The Front Runner is part of its purpose, but rather than explore the moral gray areas of this incident, it mistakes not having a point of view for insight.  The film raises a lot of questions but mostly brushes them under a rug, refusing to really grapple with difficult issues in any profound way. Its use of a lone female reporter at the Washington Post voicing token opposition to Hart feels like a pat acknowledgment of #MeToo ideals, but it almost feels like lip service to the idea rather than actual reflection. The film also spends precious little time examining what Hart actually stood for (save for a brief moment of acceptance shown to his lesbian daughter that plays like some sort of screenwriting shorthand), choosing instead to focus on the scandal, which has considerably less impact as a result.

To his credit, Reitman never attempts to absolve or condemn Hart, asking the audience instead to fill in the gaps on their own. The problem is that in his attempt to create some sort of dramatic neutrality he made a film that's just not particularly interesting. Jackman is in fine form as Hart, and Vera Farmiga makes the most out of a thankless "long suffering wife" role. But why this film, and why now? Is it a wistful look back on a time when we held our leaders to a higher standard? Is it an exploration of how we reached out current era when salacious gossip takes center stage in our media? The Front Runner doesn't seem quite sure what it is, which is what sets it apart from the Altman films it so brazenly emulates. Altman always had a twinkle in his eye, an inherent eye for cutting through bullshit. The Front Runner never quite gets there, languishing instead in a kind of inchoate examination of the heart of modern American politics that, much like Hart's campaign, never quite seems to get off the ground.