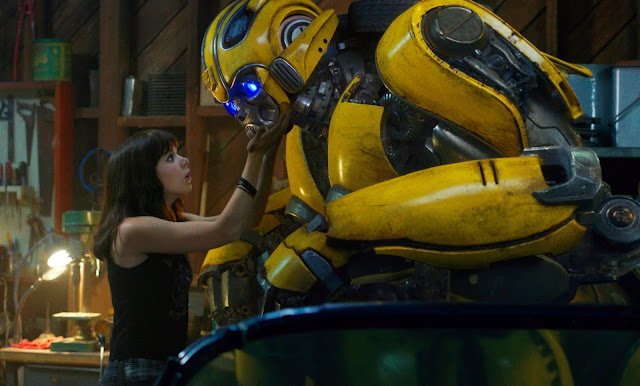 The Transformers series has always been something of a mixed bag. Michael Bay's original remains a high point in the filmmaker's career, a solid action/adventure epic that delivered on its promise to bring Hasbro's line of transforming toys to life. While a Writer's Guild strike hampered the franchise's second entry, Revenge of the Fallen (2009), Bay rallied for the original trilogy's 2011 conclusion, Dark of the Moon, which remains perhaps the filmmaker's most uninhibited opus of mass destruction.

However, the series has started to resemble something akin to dadaist cinema in recent entries, abandoning all sense of logic and narrative form in favor of incoherent world building and convoluted myth-making. Even Bay's normally strong eye for action had evolved into messy, garish CGI sequences that matched his "kitchen sink" approach to storytelling. 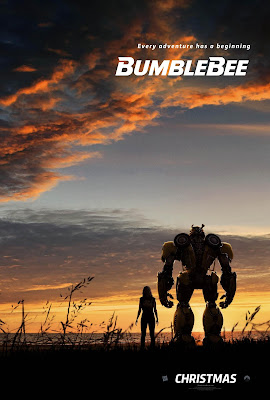 It's refreshing, then, that the series has gone back to basics for its new prequel, Bumblebee. Gone are the apocalyptic stakes of the last three films, replaced by a kind of "girl and her robot" story that actually remembers that these films are based on toys and are ostensibly for children. The result is a film with more heart than any other film in the Transformers franchise, focusing on teenager Charlie (Hailee Steinfeld) and her relationship with the titular hero. Of course, Bumblebee is pursued by some villainous Decepticons who track him to Earth, and we are treated to some glimpses of the war on the Transformers' home planet of Cybertron before Bumblebee makes his way to our planet. But for the most part the movie is relatively small scale  and self-contained, not so much interested in world-building as it is telling a good story.

Of course, it's a story we've all seen before in some variation, perhaps most notably in The Iron Giant. But director Travis Knight (Kubo and the Two Strings) keeps the focus on the relationships between the characters, and they carry the film even through its most outlandish moments. It helps that Knight realizes who his audience is, and rather than making a kids movie for grown-ups he plays straight to the young and young-at-heart. It's still a Transformers movie, with all the inherent goofiness that comes with it, and there are times when one misses Bay's penchant for visual mayhem, but Bumblebee manages to deliver on expectations without rocking the boat too much.

That is perhaps what most separates it from Bay's films - it never really takes any big risks or distinguishes its own personality. It works simply because it's more narratively coherent and straightforward than its predecessors. Perhaps it is being graded on a curve because Age of Extinction and The Last Knight were so unwatchable, but there's an almost understated charm beneath its story of giant warring robots that it's hard not to appreciate its relative modesties. The addition of Angela Bassett as villainous Decepticon, Shatter, is an inspired bit of casting, and her enthusiasm for the role is infectious. These elements may not add up to anything earth-shattering, but it's nice to see a major Hollywood blockbuster that's content to focus on character relationships over spectacle. The problem is that we've become so accustomed to large scale visual extravaganzas that when something moderately less destructive like Bumblebee, it almost feels revolutionary.

It's not, of course. Bumblebee is still a film about alien robots that can transform into cars, but unlike its predecessors it seems to understand, and embrace, exactly what it is. That's probably the most revitalizing aspect of Bumblebee of all - it isn't afraid to embrace its inherent silliness, and that gives it far more leeway to have fun. There's nothing new to see here, but Knight gives this series just enough juice to keep it going.