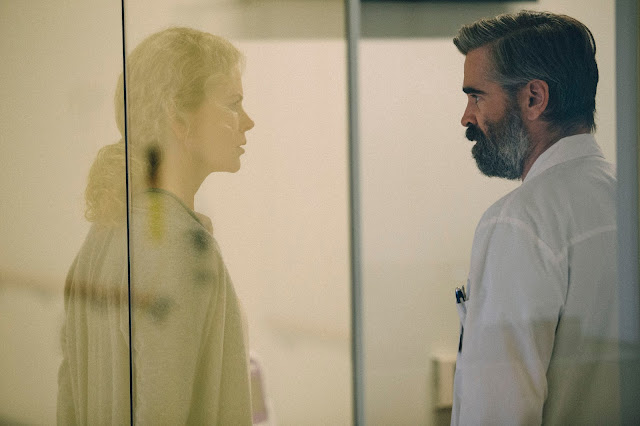 There are few more singular or distinctive filmmakers working today than Yorgos Lanthimos, the Greek auteur who seems hellbent on defying every narrative convention and conquering every bulwark of "good taste." His latest film, The Killing of a Sacred Deer, is a deliciously twisted examination of justice and personal responsibility that is at once a horror film and an absurdist comedy; a veritable molotov cocktail thrown into a world of complacency and emotional detachment.

"An eye for an eye leaves the whole world blind," the old saying goes. In The Killing of a Sacred Deer, a cardiac surgeon named Steven Murphy (Colin Farrell) strikes up a friendship with a teenage boy named Martin (Barry Keoghan) whose father died on his operating table years ago. Martin at first expresses interest in becoming a surgeon himself one day, and ingratiates himself with Dr. Murphy's family. But his friendship begins to grow uncomfortably close, crossing personal boundaries as Martin attempts to set the doctor up with his mother (Alicia Silverstone). 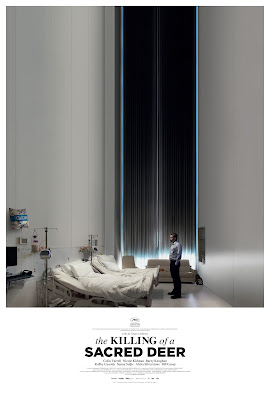 It soon becomes clear that Martin's intentions are anything but benign, as he confronts Dr. Murphy with the purpose of his interest; each member of the Murphy family will fall ill and eventually die, unless Dr. Murphy kills one of them in retribution for the death of Martin's father. Once the balance of the universe is restored, they can go on living their lives as if nothing happened.

As is typical of Lanthimos' filmography, the outlandish concept is stripped of all outward emotion, as each performance becomes  an almost rote line reading to suggest the emotional detachment of the characters. When emotion does shine through (and it does, thanks to an incredibly talented cast), Lanthimos makes sure it counts. It is disarming to watch characters have such frank conversations about deeply person topics like menstruation and puberty without any discernible feeling, but it reinforces the Murphys' disengagement with the world around them. Even as Dr. Murphy faces the test put to him by Martin, he still refuses to admit any culpability on his part, with tragic results.

Trying to divine specific meanings from a Lanthimos film can be a somewhat Sisyphean task. They are often deliberately obfuscating, but no less fascinating for that. He creates such indelibly specific worlds, where the unusual is treated as completely commonplace. The intentionally stilted dialogue and stiff performances, coupled with the atonal music, throw the audience out of their comfort zones, putting is in completely unfamiliar territory. Unable to see where the story is going, we are forced to trust the filmmaker to guide us through, almost as if blindfolded. It's wonderfully disorienting, and the results are often intoxicating.

But in The Killing of a Sacred Deer, the dangers of a lack of personal responsibility, especially among the upper classes, oblivious to the damage caused to those beneath them, is frighteningly palpable. Not to mention the tragic sacrifices often made on the altar of pride. I couldn't help but be reminded of Ruben Östlund's Palme D'Or winning The Square, another dark satire of upper class ennui that constantly holds our hand, whereas Lanthimos turns us loose in this world to fend for ourselves. I find Lanthimos' approach to be far more interesting (not to mention artistically daring). It may ultimately be about different things to different people, but that's what makes it so dynamic. You'll be hard pressed to find a more haunting or twisted social satire this year, or one that leaves such a lasting and disquieting impression.