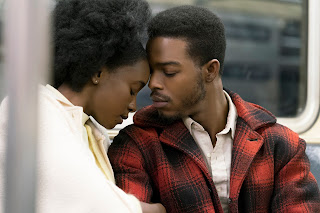 "Love does not begin and end the way we seem to think it does. Love is a battle, love is a war; love is a growing up." - James Baldwin

After famously losing, and then winning, the Academy Award for Best Picture for Moonlight (2016), a swooning, romantic meditation on the act of being black and gay in America, director Barry Jenkins turned his eye toward something perhaps even more ambitious - an adaptation of James Baldwin's novel, If Beale Street Could Talk, itself a kind of romantic fantasia on black identity. 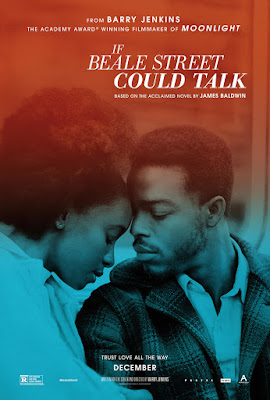 The two films are cut from the same cloth; poetic and winsome, heartbreaking yet uplifting, making the political deeply personal. In a year that has seen several great films boldly tackle race in America, from Spike Lee's BlacKkKlansman to Travis Wilkerson's Did You Wonder Who Fired the Gun?, If Beale Street Could Talk takes a more understated and lyrical route to similar ends. It would be a mistake to assume that Jenkins' subdued style belies a lack of righteous fury. His style may not be radical or indignant, but it gets at the heart of an essential truth about being black in a world dominated by whiteness. Jenkins finds beauty in the essence of blackness in the form of two black people falling in love in spite of the systemic obstacles of the prison industrial complex.

The film's protagonists, Tish (Kiki Layne) and Fonny (Stephan James), are an almost idyllic couple, who share a love so pure it almost feels too wholesome for this world. The prim, shy Tish, the strong, doting Fonny - they seem like a match made in heaven. At least until Fonny gets arrested for a rape he did not commit, railroaded by a white police officer with a grudge and a desperate and frightened woman who never saw her attacker. Compounding their troubles, Tish discovers that she is pregnant, a revelation that threatens to tear her family apart. Yet all the while they are sustained by their own intoxicating memories of their courtship, giving them hope for a better future, even when simply existing is a daily struggle.

While the film is set in New York, Memphis' Beale Street, the birthplace of jazz, serves as a kind of metaphor for the black experience. In Baldwin's lush prose, the film informs us that there was a time when every black person in America came from a Beale Street - the "black part of town," a segregated world mistrusted and avoided by white society. With the odds stacked against them and a prison system seemingly designed for the sole purpose of re-enslaving young black men, Tish and Fonny struggle to carve out their own little corner of the world, despite every obstacle thrown in their path by system of white supremacy. 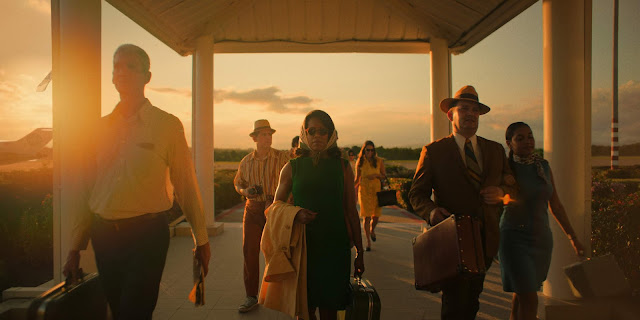 While Moonlight, an adaptation of Tarell Alvin McCraney's play, "Moonlight Black Boys Look Blue," was awash in cool blues and purples, If Beale Street Could Talk is distinguished by a warm palate of yellows, reds, and browns; earthy, grounded, and rich. It's a sublime experience - filled with gorgeous costumes, comforting earth tone hues, Baldwin's vibrant prose, and rapturous Nicholas Britell music. It often feels like a Douglas Sirk film by way of Wong Kar Wai; a romantic soap-opera on the surface, but something much deeper and more devastating underneath. Even here, this seemingly perfect love story is held back by forces beyond the couple's control, and yet like generations before them and generations after, they forge through with their heads held high, because they understand their own inherent dignity and worth. It's as inspiring as it is heartbreaking, uplifting as it is painful - an emotional sucker punch that feels pregnant with a constant sense of beauty coupled with an unavoidable air of tragedy. One can't help but be reminded of Ava DuVernay's remarkable sophomore feature, Middle of Nowhere, in its wrenching depiction of a racist justice system's pointed destruction of the black family, as sure sign that Jenkins is in good company here.

"All good art is political! There is none that isn’t." Toni Morrison once said. "My point is that is has to be both: beautiful and political at the same time." If Beale Street Could Talk packs a political punch without ever directly saying so. It is at once a celebration of blackness and an admonishment of white supremacy, and the way it so insidiously (and at times imperceptibly) worms its way into the African American community's daily lives. It is a work of profound and tremulous beauty, a haunting tone poem that feels like the work of an artist filled with hope but constantly on the verge of tears. In the words of Baldwin himself, "Fires can't be made with dead embers, nor can enthusiasm be stirred by spiritless men." In If Beale Street Could Talk, Jenkins stirs those embers with with a great and fearsome power, releasing them into the wind in a flutter of tiny sparks like a million specks of light in the darkness, folding flashbacks within flashbacks in a non-linear structure that delves deep into the essence of African American life. If Beale Street could talk, its music would be the deep, jazzy, soulful music of love overcoming all things, and Jenkins speaks the language of hope with bracing, enrapturing fluency.