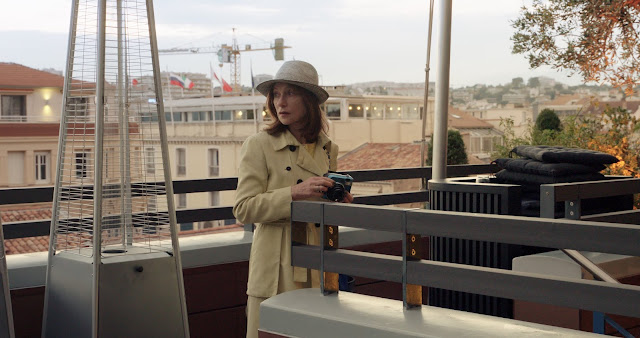 Now that The Day After has been released, Claire's Camera has something of a reputation as the lesser middle child of Hong Sangsoo's trilogy of films dealing with his much publicized affair with actress Kim Min-hee that began with 2017's On the Beach at Night Alone. Yet a second visit to Claire's Camera reveals something much deeper going on beneath its seemingly modest surface. 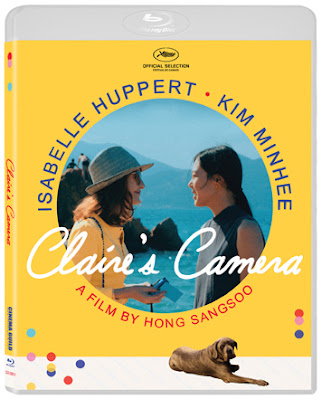 At only an hour long, Claire's Camera is surely the shortest of the three films, and on first glance it seems such a lightweight bonbon of a movie, a meandering seaside ramble about a jilted lover and a sunny stranger with a camera. And yet, the mystery grows with repeat viewings. Who is Claire (Isabelle Huppert) anyway? Why does she suddenly show up in the lives of Jeon Man-hee (Kim Min-Hee) and Director So Wansoo (Jung Jin-young)? Did Man-hee really have an affair with the filmmaker, as his wife and her employer insinuates when she fires Man-hee at the beginning of the film? Is it all a misunderstanding? Or is something else going on?

Hong never answers these questions. Director So and Man-hee are clearly cinematic avatars for Hong and Min-Hee, yet it's as if Hong is using Claire, the mysterious schoolteacher who arrives at the Cannes Film Festival with her camera in hand, to suggest that what is viewed through the lens of the press isn't exactly reality. Hong's films rarely adhere to typical boundaries of space and time, and Claire's Camera is no different, unfolding in a non-linear structure that leaves the audience somewhat disoriented. But that also seems to be the very point of what Hong is driving at here. The film feels light and carefree, so it's easy to mistake it as slight. Yet Hong isn't one to make something so transparently superficial.

The film is charmingly light, yet its effervescent exterior belies a sense of pain and melancholy beneath the surface. When you take someone's photograph, Claire explains, they become a different person. When viewed through the lens of tabloid cameras, is Hong's affair with Kim something completely different? Did the press get it all wrong? Are we, the public, somehow to blame for skewing the relationship? With the camera, we only get part of the story, a frozen moment in time isolated from its own reality. In Claire's Camera Hong deftly tries to right that wrong. Unlike On the Beach at Night Alone or even The Day After, Claire's Camera is less apologia and more condemnation, a sly indictment of those who only see what is captured through a lens, delivered with smile and a knowing smirk.