Steve McQueen is a filmmaker that is impossible to put in a box. His filmography thus far has been wildly varied, from his searing debut feature, Hunger, which featured Michael Fassbender as an Irish dissident on a hunger strike, to Shame, a frank examination of the life of a sex addict, to the Oscar-winning slavery drama 12 Years a Slave. 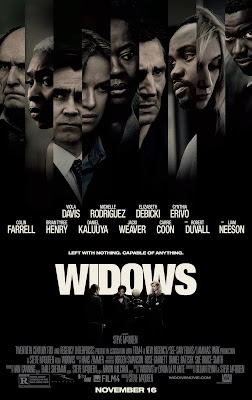 His latest film, Widows, is a stylish genre exercise that couldn't feel further away from the seriousness of those previous films, and yet it somehow feels right at home for a man who isn't afraid to ask difficult questions even in the midst of a heist film. v is the kind of film that sneaks up on you, masquerading as an action film when in reality McQueen has something much more complex on his mind.

Centering round four women whose husbands died during a botched robbery, Widows examines issues of race, class, and politics as the women decided to take up their husbands' mantle and pull off the next planned job in order to pay off debts to the target of their last job. The target - a white politician (Colin Farrell) running in a majority black ward in Chicago whose power stems from dynastic family politics rather than anything he has earned himself. Yet his opponent, a black populist running to retake his ward from the corporate powers that have gentrified it and bled it dry, is just as corrupt; deploying violent fixers to settle old debts.

It falls to Veronica Rawlings (Viola Davis), wife of crime boss Harry Rawlings (Liam Neeson), to clean up the mess left by the men around her. Yet the deeper in she gets, the more it becomes clear that the dirty dealings perpetrated by those in power go much deeper than she realized. v has no time for the machinations of powerful men, where worship of money and the free market has corrupted the political process beyond all hope. McQueen knows that the men with the money always run the show, and will stop at nothing to get power in order to acquire even more money. Viola Davis is here to put a stop to that nonsense, and she burns it all to the ground with a vengeance.

Make no mistake, this is Davis' show. She gives a ferocious performance of great resolve barely masking her world-weary resignation about having to clean up a yet another white man's mess. Strong turns by Elizabeth Debicki, Michelle Rodruguez, Daniel Kaluuya, Colin Farrell, and Robert Duvall provide excellent back up for Davis. McQueen also wisely plays off the film's violence with a striking nonchalance. He makes the wounds matter, but he never dwells on them. The violence is quick, brutal, and never quite what we expect. McQueen is more interested in the consequences of that violence, and the consequences are never pretty. His tightly crafted style and astute understanding of both human nature and political reality makes Widows something special indeed - a thriller with a social conscience and a hell of an ensemble cast.