Set in the 1970s in Mexico City, Alfonso Cuarón's Roma is a kind of fantasia of the mundane, a loving and often haunting semi-autobiographical tale of a nanny named Cleo (Yalitza Aparicio) and her effect on the family she serves.

Told predominantly from the point of view of the children (and therefore from Cuarón's POV), Roma examines the banalities of Cleo's day-to-day life as she attempts to balance her personal life with her service to her family, something to so consumes her life that it almost becomes her whole identity. Cuarón paints much on Aparicio's seemingly emotionless visage, but her powerhouse performance quietly suggests the roiling emotions beneath. After becoming pregnant by a shiftless lout, Cleo finds herself being cared for by her employers. The parents having just split up, the family is now in disarray, with ever more responsibility falling on the mother to keep the household from falling apart. This means even more work for Cleo - a beloved caretaker for the children who will never truly be a part of the family. 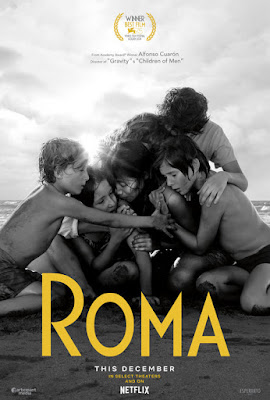 That's the tragic dichotomy at the heart of Roma - Cleo is perhaps the key holding the entire family together. The children see her as a kind of superhero, a surrogate mother seemingly destined to never have children of her own. And yet she is constantly reminded, through actions both micro and macro, that she doesn't really belong in this world. Even when the family invites her along on a beach vacation to help her recover from a devastating personal tragedy, she is still treated like a servant, despite being told that she would not have to work. The film has been criticized somewhat for this sequence especially for turning Cleo into some sort of idealized hero, a working class savior of the upper class. Yet this is a fundamental misreading of Cuarón's intentions. Roma may be a tribute to his childhood nanny, yet it is her quiet resilience being celebrated, not her servitude.

Cuarón clearly understands the sacrifices Cleo is making here, and Roma feels as much like an atonement for the sins of his family as it does a celebration of her sacrifices. Cleo's suffering isn't being celebrated - her strength is. The film is inherently tragic, a kind of elegiac tribute to a woman who gave up her own life and personal autonomy to serve someone else's, and nowhere does Cuarón suggest that this was a good thing. Cleo is a hero, but she's a tragic one; a saint, but a flawed one. To young Cuarón she was an angel sent from heaven, but adult Cuarón knows better, and so does the audience. That's what makes Roma such an incisive examination of class relations - it's that dichotomy between the children's view of Cleo and the adults' treatment of her that highlight her struggle. She's the family's lynchpin, but is constantly being reminded that she's not really family. For every moment of kindness and warmth she still must wade through an actual sea of shit left by the family canine dog in the family's narrow garage every day, much too small for the massive, showy car it's meant to house.

Shot in stark black and white by Cuarón himself, Roma feels at once epic and intimate, like hazy, half-recalled memories and impressions of a childhood that is perhaps not as rosy as it once appeared to be. Even the film's moments of joy are always underscored by a hint of melancholy. Surrounded by social change and unrest, the privileged family may seem a kind of sheltered oasis, yet Cleo must still suffer the realities of lower class life, even while surrounded by privilege. In that regard, Roma is a kind of examination of Cuarón's own privilege, exploring both class and racial inequalities through a stirring, black and white lens that feels something less like a plea for atonement than a sincere and loving apology.

That's what makes Roma a success where films like Green Book have failed. Roma confronts and actively examines privilege, whereas Green Book blithely pretends it doesn't exist. Directed, shot, and edited by Cuarón, it is clearly a deeply personal work for the filmmaker, a tribute to a woman who shaped his life and finally deserves her place in the spotlight. Yet it is not without its pain, as Cuarón acknowledges what was good for him may not have been so good for her. That makes for something unique and deeply human, a complex and wrenching exploration of privilege and class relations that cuts deep with a kind of sharp naturalism that recalls De Sica and a haunted magical reverie worthy of Fellini. Few other films have so indelibly captured the contradictions of the relationship between servant and employer, showcasing a true craftsman's eye for extrapolating life's often unjust inconsistencies.