If you've spent much of the last two years looking around and thinking "where are we going and why are we in this hand basket," then you're not alone. With democratic norms being chucked out the window on almost a daily basis, it's easy to become disillusioned about the state of our political system. But how did we arrive at this moment? Did Donald Trump arrive out of nowhere, or is he the product of system that has been laying the groundwork for someone like him for decades? 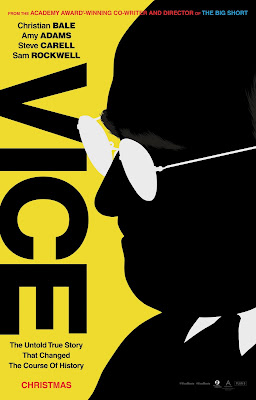 That's essentially what director Adam McKay (The Big Short) is trying to investigate in Vice, a biopic of former Vice President Dick Cheney (Christian Bale) on its surface, and a stinging satire of our current political situation underneath. At a time when President Trump is seemingly wiping away every political norm with a constant stream of racism and unchecked corruption, it's easy to look back at the George W. Bush Administration of something akin to nostalgia. Iraq may have been a major blunder, but at least he wasn't calling the press the "enemy of the people" and locking immigrant children in cages, right?

Vice is not about George W. Bush (although he does make a few appearances courtesy of Sam Rockwell), it's about the man behind the curtain. Cheney was perhaps the most powerful VP in history - exercising great executive power and overseeing many operations in the White House without presidential oversight. Vice explores how he got to that point, from his days as a congressional page to Donald Rumseld (Steve Carell) to his days as Secretary of Defense during George H.W. Bush's Administration, all the up to his tenure as Bush 43's Vice President. McKay mixes it all into a non-linear narrative structure that casts Cheney as a kind of Machiavellian villain, always in the shadows, pulling strings behind the scenes but never calling much attention to himself.

The film deploys a mix of styles to explore Cheney's roots and motivations - from Shakespearian tragedy to melodrama to satirical comedy, some landing their punches but most falling flat. The biggest problem with Vice is its eclectic mix of styles doesn't mesh particularly well, the non-linear structure also undercutting any dramatic tension or depth, hampered by a painful framing device featuring an Iraq War vet that comes across as a shameless bit of audience manipulation. The film's scattershot nature doesn't allow us to get to know Cheney in the least. This is part of the point, of course, Cheney's lack of transparency is notorious, and one of the film's major focuses, but the film really fails in its attempts to connect Cheney's machinations to our current political climate.


Vice touches on theories of executive privilege and the repeal of the Fairness Doctrine that paved the way for unchecked presidential power and the rise of Fox News, but Cheney remains just as enigmatic at the end of the film as he was at the beginning, a "ghost" as the film suggests who basically ran the country for eight years while W's good-natured bumbling masked the sinister imperial ideas roiling behind the scenes. The real standout here is Bale's uncanny performance as Cheney, signature sneer and all, a constantly inscrutable manipulator who played his cards close to the vest. Amy Adams also makes a fine showing as Lynne Cheney by way of Lady Macbeth, and Nicholas Britell's soaring score plays every moment, no matter how ludicrous, as an over-the-top melodrama.

Yet for every satiric touch that hits the mark, many more never even come close. Vice is a mess, an unfocused and unwieldy portrait of Vice President Cheney that never manages to mount more than a surface-level inquiry of his motives and their repercussions. McKay attempts to implicate the audience for allowing Cheney the destructive power he ultimately wielded, but it's an implication that comes out of nowhere. It's as if McKay is throwing everything at us hoping that something sticks. Clearly the target audience is in on the joke here, but the film often feels smug and cynical rather than illuminating or insightful. It is, as Shakespeare would say, "full of sound and fury, signifying nothing," an occasionally amusing but ultimately hollow exploration of recent history that fails to bring anything new or particularly interesting to the table.