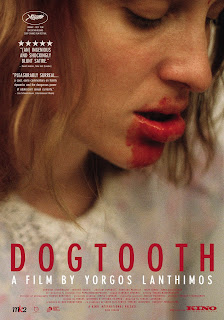 There are times when words are simply inadequate to describe a film; not necessarily in terms of quality but in terms of complexity and depth. One could probably write an entire book on the many layers of Yorgos Lanthimos' dense and challenging social satire, Dogtooth. No one review could possibly cover everything that needs to be said about it. It is a film that demands to be analyzed, pored over, and examined with great diligence and care. Dogtooth is no easy film to digest. Nor should it be. It is every bit as complex and difficult as the themes it tackles, refusing to let its characters or its audience off the hook.

Often recalling the works of Michael Haneke and Lars von Trier, Dogtooth follows the lives of a very unusual Greek family whose three teenage children have never left the confines of their walled-off country estate. While the father goes out to work every day, the children are imprisoned in the compound, completely sheltered from the outside world, living under the strict rule of their parents, who carefully control every thought and idea going into their children's heads, even going so far as to invent an entirely new vocabulary to explain foreign ideas (zombies, they tell them, are a type of flower). 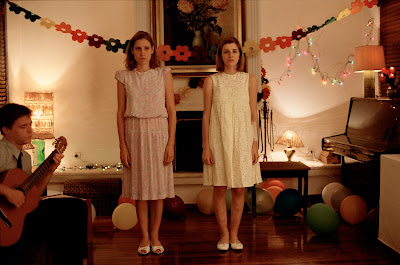 Aggeliki Papoulia as Older Daughter (left) and Mary Tsoni as Younger Daughter. Image courtesy of Kino International.
The children spend their days inventing their own games and dances, living in a completely controlled environment with no knowledge of any societal norms. They are driven by fear of the unknown, as their father explains to them that cats are in fact savage beasts that eat children who leave their home. They are told that they will not be able to leave their home until their "dog teeth" fall out. In other words, they will be captives in their own home forever.

But when the father brings in a trusted outsider to satisfy his son's growing libido, he introduces an unknown variable into the otherwise stable equation. The woman brings in forbidden movies, such as Jaws and Rocky, showing them for the first time glimpses of the outside world as well as new words and ideas that had never before dreamed of. The father's efforts to completely control his children's reality begin to fall apart, and the twisted social experiment begins to fall into chaos. 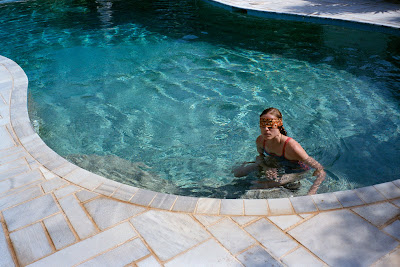 Image courtesy of Kino International.
Dogtooth is a bleak and disturbing examination of the folly of sheltering children, taking the idea to ridiculous extremes, laying bare the dangers of not only overly strict parenting, but of an oppressive society as well. Lanthimos mercilessly satirizes attempts to control thought and manipulate lives, using this family as a microcosm for society at large. Despite the father's best efforts to control his children, foreign ideas are inevitably introduced, and they have a devastating effect on those who are not properly prepared for them. Systematic oppression leads to disastrous consequences, and while that idea is far from revolutionary, Lanthimos stages it in a blunt and shocking way.

It often plays out like M. Night Shyamalan's The Village as directed by Michael Haneke, and is a much more successful distillation of the themes that Shyamalan so hamfistedly raised. Lanthimos demonstrates a sharp eye for satire, using pitch black comedy to underline this darkly ferocious tale. Dogtooth has bite, and while it isn't always easy to watch, it's one of the most uniquely haunting, and unnerving, films of 2010.