Coming on the heels of Sony's ill-advised and goofy Venom film, the animated Spider-Man: Into the Spider-Verse seemed destined for failure. An animated Spider-Man film from the studio that brought us the execrable The Amazing Spider-Man 2, completely separate from the Marvel Cinematic Universe iteration of the character, seemed like a questionable prospect at best. 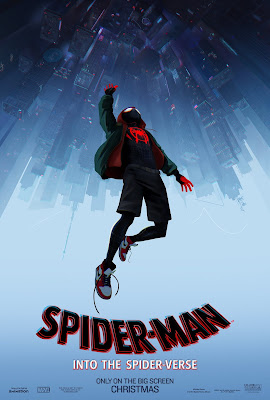 The lack of expectations leading up its release turned out to be a mark in its favor, because Into the Spider-Verse isn't just good, it's one of the best superhero movies to be released in the last 10 years. It's clever, engaging, dazzlingly animated, and just plain fun. Perhaps most important of all, it never takes itself too seriously, presenting a refreshingly irreverent, sometimes tongue-in-cheek attitude (thanks to the sharply written screenplay by Phil Lord and Rodney Rothman) that gives us Spider-Man like we've never seen him before.

In fact, it gives us several Spider-Mans we've never seen before, because it justifies its existence by exploring alternate universes where there can be infinite iterations of the character. Our hero here is Miles Morales (Miles Morales) rather than Peter Parker (Chris Pine), the half-black half-latino teenager who takes up Spider-Man's mantle after the Kingpin (Liev Schreiber) opens up a portal into another universe in an attempt to resurrect his dead wife and child, killing Parker in the process. However, it also brings an older version of Parker (Jake Johnson) into Morales' universe, along with a 1930s noir Spider-Man (Nicolas Cage), Spider-Woman (Hailee Steinfeld), futuristic Spider-Woman Peni Parker (Kimiko Glenn), and Spider-Ham (John Mulaney). Together they must stop the Kingpin from restarting his massive collider and get back to their own universes before it destroys them all.

Into the Spider-Verse dispenses with most of the usual superhero origin tropes, winking at the audience as it flies through them in Cliffs Notes fashion. And yet it never treats its story like a joke. It gives us fully developed characters worth caring about, and an original story that feels like nothing we've ever seen in a superhero movie before. It grounds its story in actual human emotion, even while wowing us with its stunning animation, tightly crafted action sequences, and diverse cast of heroes each making their mark. In many ways, Sony has actually out-Marveled Marvel Studios, introducing us to a wide universe of possibilities without ever once feeling like it only serves a small part in a much wider plan.

It never loses sight of the fact that Morales is just a kid struggling to navigate his daily life while taking on massive responsibilities. He is not a fully formed hero yet, and that's what makes his Spider-Man so special. By making it an animated rather than live action film, it gives the filmmakers great leeway in crafting its visual milieu, and the results are often jaw-dropping. The climax, with its multiple colliding universes smashing into one another, is perhaps one of the year's most sensational sequences, taking Into the Spider-Verse into another astral plane of superhero filmmaking. This is the real deal, a side-splitting, suspenseful, and genuinely moving film that bounces Sony back from the misstep that was Venom and proves there is more than one way to tell a superhero story. This genre isn't out of gas yet.