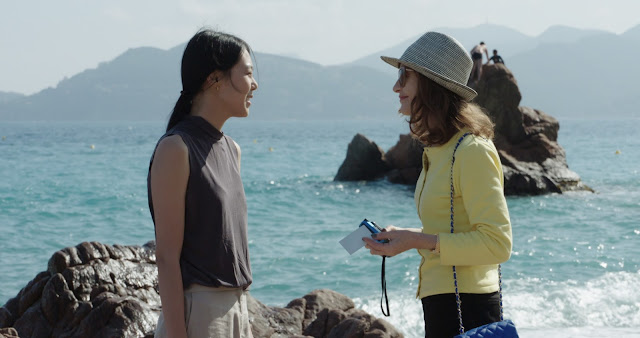 After his much publicized affair with actress Kim Min-Hee during the filming of 2015's Right Now, Wrong Then, Korean auteur Hong Sangsoo has seemingly focused his career on exorcising the demons that resulted from the scandal and his subsequent divorce from his wife of 30 years.

It began with 2017's On the Beach at Night Alone, a gloriously meta film that starred Kim herself as an actress dealing with the fallout from an affair with a famous film director. A third film in the unofficial trilogy, The Day After, has yet to be released in the United States, but for now we have Claire's Camera, a lighthearted confection shot during the Cannes Film Festival that feels less like a dramatic apologia and more like a situational meta-comedy. Tonally, it couldn't be further away from On the Beach at Night Alone, focusing on a producer's assistant named Manhee (Kim again) who is fired by her employer for reasons her employer refuses to share. 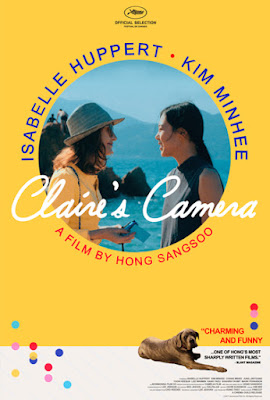 It is soon revealed that Manhee had a brief, drunken tryst with the producer's longtime partner, a filmmaker humorously named So Wansoo (Jung Jin-young). The entire thing is captured by Claire (Isabelle Huppert), a teach from France who is also an amateur poet and photographer. She unknowingly inserts herself into this love triangle, befriending both So and Manhee, insisting that photography can change their lives forever.

As in On the Beach at Night Alone, it's difficult to tell where reality ends and the film begins. Here, Hong seems to suggest that in filming his own romantic travails, he is both helping himself heal and taking a toll on his subjects, in this case, Kim. And yet, Claire's Camera feels like such a lighthearted confection, with a clever, meta-textual sense of humor (a poster for Hong's 2016 film, Yourself and Yours, hangs in Manhee's office, Huppert comments that this is her "first time in Cannes"). Hong seems to be both winking at the audience and implicating us in his own relationship drama, which was the subject of much tabloid gossip in South Korea. By filming this, how is he changing who he and Kim really are? Or is he trying to course correct the paparazzi coverage of his affair with Kim?

Either way, Claire's Camera is a fascinating work, a fish-out-of-water comedy that finds gentle humor in misunderstandings and barriers of language amidst a much more painful and personal story. It may be a minor companion piece to On the Beach at Night Alone, serving as a lighthearted respite between that film and The Day After; yet under its beautifully photographed surface is a layer of pain that doesn't go unnoticed by Claire, and the film ends on an ambiguous note as the group prepares to leave Cannes, where most Hong films have made their debut. They're leaving the film festival behind, but what are they going back to? It's a reprieve from reality that may be short-lived, and Hong knows it. Claire's Camera is a lovely thing indeed, perhaps the filmmaker's loosest and most formally relaxed film since In Another Country. It represents Hong's continuing quest to not only move past his indiscretions, but to understand them on a deeper level. “The only way to change things is to look at them again very slowly," Claire observes at one point. In Claire's Camera, Hong is able to explore the humorous absurdities of his situation from a new angle, with the camera as an almost impartial mediary barrier, but one can't escape the feeling that it's never far away from the still raw nerve just beneath the surface.