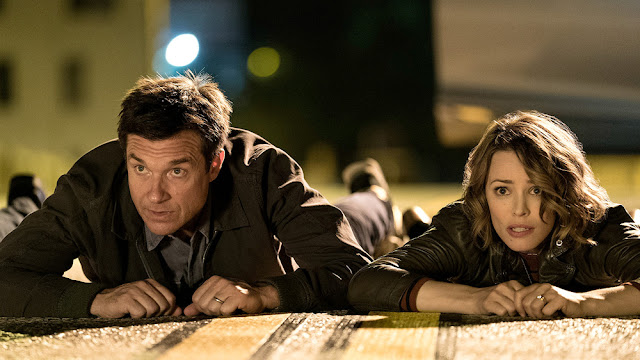 Mainstream comedies have become so homogenous and self-referential that it's increasingly rare to see one that so gleefully charts its own path as John Francis Daley and Jonathan M. Goldstein's Game Night. Daley and Goldstein, whose only previous feature credit is 2015's National Lampoon reboot, Vacation, take an outlandish premise and turn it into comedy gold simply by playing it straight.


Max (Jason Bateman) and Annie (Rachel McAdams) love games. Their competitive spirit leads them to meet and fall in love at a trivia competition at a local bar, and the two eventually get married and begin hosting weekly game nights at their home with their friends Kevin (Lamorne Morris), Michelle (Kylie Bunbury), and Ryan (Billy Magnussen). Their idyllic weekly meetings are interrupted, however, by the arrival of Max's overachieving brother, Brooks (Kyle Chandler), who invites everyone over to his place for a game night to end all game nights. 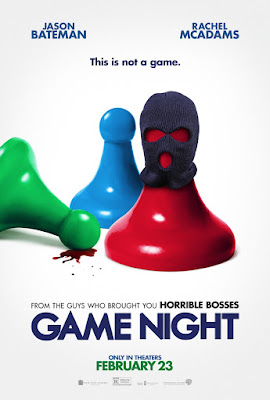 Upon arrival, they discover that he has arranged a fake kidnapping from a novelty party company called Murder We Wrote, in which one of the partygoers will be kidnapped, and clues left behind for the others to solve. The winner takes home Brooks' flashy new car, which just happens to be the car that Max has always dreamed of. Having always lived in his brother's shadow, Max is determined to win the car and finally show Brooks up. But when Brooks is kidnapped by actual kidnappers, the night suddenly goes from carefree game night to deadly race for survival. The only problem is that none of the players realize it's no longer a game, and continue to play as if it's all in fun.

Game Night succeeds because it treats everything happening around its characters seriously, right down to the brooding score by Cliff Martinez (Drive, The Neon Demon). The stakes are high, the situation is dire, but the comedy comes from the characters having no idea that any of it is real. It plays like an actual crime thriller populated by happy-go-lucky amateurs, leading to a series of twists and turns that are by turns predictable and completely surprising. It's refreshing to see a film, especially a comedy, that manages to keep the audience guessing. And while not every joke lands, the film is held together by a thoroughly gung-ho cast that manages to create indelible characters out of even the most generic of roles. The leads all nail their fish-out-of-water roles with just the right amount of amused detachment from the proceedings, keeping things light even when the film takes dark turns, so that the central joke never wears out its welcome.

Part mob thriller, part gross-out comedy, Game Night manages to deliver heart-pounding action and big laughs in almost equal measure. There's even a single-take action sequence at the film's climax that stands toe-to-toe with anything in John Wick and Atomic Blonde. It's a giddy genre pastiche with a deliciously dark sense of humor that feels both fresh and spontaneous without a need for any self-congratulatory irony, which by any measure is an unfortunately rare quality in any genre these days.  That makes Game Night something of an unusual commodity, and while it may not be destined to become a comedy classic, it has energy and verve to spare, operating with a sense of comic anarchy that is hard to resist.