Ildikó Enyedi's On Body and Soul is a film as obfuscating as it is enrapturing, purposely holding its audience at arm's length while thrusting us into a world of at times profound lyricism and haunting quietude. The film centers around two co-workers at a slaughterhouse; Endre (Morcsányi Géza), an irritable, no-nonsense financial manager with few friends, and Mária (Alexandra Borbély) a socially awkward temp whose overly developed memory leads her to be painfully exact in her work.

Both are lonely souls, not really relating to anyone around them. Mária finds herself an object of ridicule at work, displaying an almost autistic inability to understand social cues and distaste for human contact, while the prickly Endre prefers to stay in his office, isolated from the rest of the business. At night, both go home alone and dream of a snowy forest where they appear as a deer foraging for food in the quiet wood. They soon discover that they are sharing the same dream, and what began as a seemingly random occurrence soon becomes a much deeper human connection. Each night, they meet each other as deer in those woods, sharing a connection they could never share during the day. 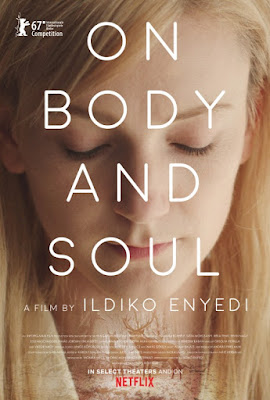 Things become complicated, however, when they try to carry their relationship over into their waking hours, as their own inherent awkwardness threatens to get in their way. And yet, each night, they are called back into their forest haven, where words and social conventions don't matter, giving them the chance to create something beyond their own abilities.

It's a beautiful idea, watching two people's social awkwardness fall away when the need for language and social convention falls away. As two deer in a snowy wood, Endre and Mária forge a connection beyond their own ability to articulate. Yet, by its very nature, the film is distancing because its characters are distancing. Its dream sequences feel nearly transcendent, taking the film beyond language and existing on a wholly different plane. The awkwardness of their waking relationship, however, remains very purposely frustrating. On the other hand, Géza and Borbély handle their characters well. It's refreshing to see such broken and imperfect characters take center stage in a love story like this. Both live on society's margins, neither is classically "beautiful," and yet in their dreams none of that matters.

What's so special about On Body and Soul is that these two introverted characters are never going to be very articulate. By its very nature there can never be any great verbal introspection or profound statements of love. And yet, the silence says more than any monologue ever could. It is occasionally alienating, even off-putting, but what these two souls find beyond their own bodies is something deeply beautiful indeed. Enyedi has crafted an unusual love story that's not quite like anything else I've ever seen, an unspoken cry of loneliness that displays a deep understanding for those who don't quite fit in, who can't quite express their emotions, and finds a haunting and lyrical way to transcend those hangups and find a connection beyond human understanding.