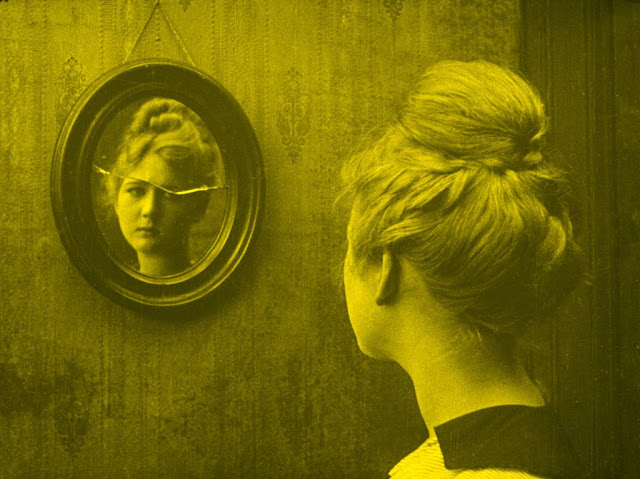 On the surface, Lois Weber's Shoes seems like the kind of none-too-subtle morality play that was in vogue in 1916. A young woman, struggling with a life of poverty, is forced to sell her body in order to purchase a new pair of shoes. A lonely shopgirl, young Eva (Mary MacLaren) trudges home day after day to hand over her meager paycheck, a mere $5 a week on which her family solely depends to survive. Her father is a shiftless lout who refuses to get a job, spending his days laying in bed reading (an almost quaint 1916 version of sitting in front of the TV). Her mother is desperately trying to pay the rent and put food on the table with Eva's meager earnings. 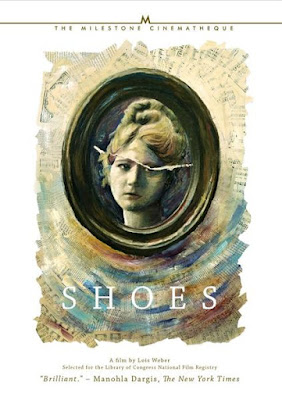 All the while, Eva's shoes are falling apart, and she is reduced to cutting out cardboard soles to stuff in them to keep the water out. Standing on her feet for hours a day in her ragged shoes, she dreams of one day being able to purchase the new pair in the shop window for $3. Each week she is told they can spare the money next week, yet with each passing week, new problems arise that set them back. Eventually, Eva comes under the thrall of a creepy gentleman, who offers her what she wants in exchange for one night with her. She accepts, and in so doing destroys what was left of her fragile state of being.

Shoes has all the hallmarks of the typical "social conscience" movies of the early part of the 20th century, presenting a somewhat outlandish situation in which a young woman loses her virtue. What sets Shoes apart is its decidedly female point of view. Weber has a better grasp on the situation than most male filmmakers, displaying a keen understanding of the societal issues that have lead to her plight. Weber never places blame for the situation on Eva, instead turning a withering eye on the predatory and lazy men in her life. Like a 100 year old precursor to the #MeToo movement, Weber's perspective is disarmingly progressive, even by modern standards (with a few obvious caveats), showing that women have always suffered for the mistakes of men.

Eva's climactic selling of herself doesn't happen until the very end of the film, but when it does, it's devastating. Mary MacLaren's performance is incredible, her striking features look like something out of a Victorian painting, and Weber uses her look of broken innocence to her advantage. Weber is an often unsung talent among silent filmmakers,  her decidedly feminist perspective is something of an anomaly. Yet her craft remains impeccable, using close-ups of MacLaren's increasingly haunted face in ways that would presage Carl Dreyer's The Passion of Joan of Arc.

The new restoration, cobbled together from disparate elements by Milestone Films, is a lovely thing. While the difference between the prints from which it was culled is often obvious (bacteria damage has all but washed out one particular scene), the color tinting has been beautifully preserved, and Weber's framing is as impressive as ever. It's a glorious resurrection of a forgotten gem that remains as stirringly relevant was it was in 1916. Selected for the National Film Registry, and now released on Blu-Ray for the first time by Milestone Films, Shoes has risen like a phoenix from the ashes to take on new life in a world that perhaps hasn't changed as much as it should have in the century since its release.