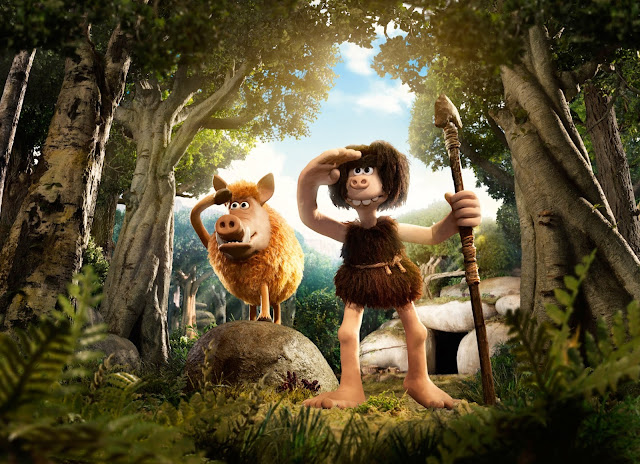 In a world dominated by computer generated animation, the claymation artistry of Britain's Aardman studios feels like a vestige of a bygone era. Carefully constructed with clay figures, Aardman's films are filled with old fashioned ingenuity and hangdog charm. Early Man, their latest film from director Nick Park (Chicken Run, Wallace and Gromit: The Curse of the Were-Rabbit), fits comfortably into their filmography, but it also feels a bit like Aardman on autopilot. The ingredients are there, but they don't always seem to add up. 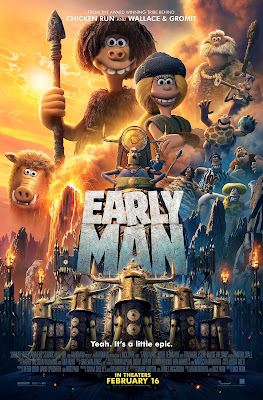 The film takes us back in time to the stone age, where our hero, Dug (Eddie Redmayne), lives with his tribe in an idyllic valley. Their peaceful existence is interrupted by the arrival of Lord Nooth (Tom Hiddleston), the governor of a bronze age civilization who wants to mine the valley for its ore. So Dug challenges the bronze age football team to a match to save their valley. If the cavemen win, they get to return to their valley. If they lose, they will be slaves in the bronze age mine for the rest of their lives. There's only one problem, none of the cavemen have ever played football (or as we call it in America - soccer). So they enlist the help of Goona (Maisie Williams), a bronze age girl who dreams of playing football on the big pitch in a time when women aren't allowed.

It's a rather conventional story by Aardman standards, albeit set in an unconventional location. Park has some fun with the prehistoric setting (although I'm sure the blatant and often amusing historical inaccuracies would make Neil Degrasse Tyson apoplectic), creating a unique and fully realized world. The humor is more hit or miss here, mixing Aardman's trademark dry wit with more lowbrow slapstick humor that doesn't always work. It's a charmer, to be sure, but it doesn't seem to have the spark of other Aardman features like Wallace and Gromit or Shaun the Sheep.

It's hard to resist their particular style. The visuals are impressive and the writing is often strong, occasionally hitting us with so many puns and subtle jokes at once that it's almost impossible to catch them all. It's a shame, then, that the rest of the film feels so conventional, relying on a more broad sense of humor that too often lacks Aardman's trademark visual drollery. Call it an Aardman-brand TV dinner - it gets the job done and entertains you at the time, but unlike many of their previous adventures, you may find that it doesn't stick with you in quite the same way. Early Man lacks the strong characters that have made the studio's work so indelible, leaving the audience hungry for something more substantial. It's refreshingly tactile, but ultimately comes up short when compared to the usually high Aardman standard.