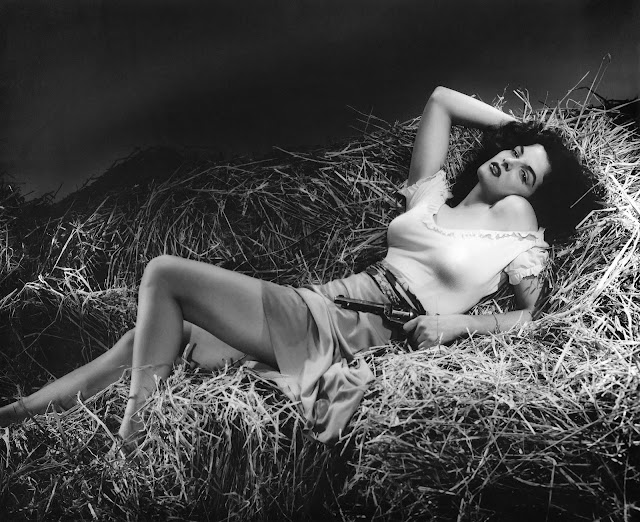 Howard Hughes' western, The Outlaw, gained infamy for its graphic violence and liberal display of Jane Russell's cleavage. It may seem tame now, but in 1943, it certainly pushed the envelope for what could be shown on screen. Naturally, it was a smash hit, and Russell became a household name. But Hughes was never much of a filmmaker, he was a wealthy man with big ideas and expensive toys, but rarely did that translate into anything more than the man trying to one-up himself on screen. 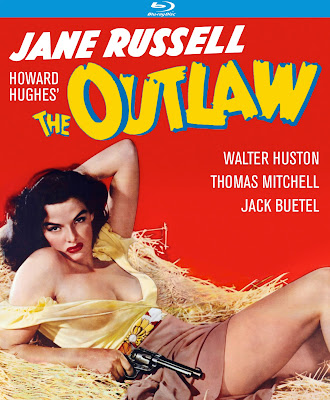 Even the presence of Howard Hawkes as co-director can't save Hughes from himself. The Outlaw is a tonal mess, retelling the oft-told tale of Pat Garrett (Thomas Mitchell) and Billy the Kid (Jack Buetel) as a buddy comedy gone wrong, with Doc Holliday (Walter Huston) as the go-between who falls out with Garrett over his newfound friendship with Billy. Things become further complicated by Rio McDonald (Russell), Holliday's go-to girl, who falls in love with Billy while he's convalescing from a gunshot wound in her home. Things get hot and heavy, and and the entire powder keg threatens to blow when Holliday discovers their secret affair. With Holliday, Garrett, and Billy on three sides, Rio finds herself caught in the middle between three of the Wild West's most legendary figures. But only one can come out alive, and only one can win the girl.

Hughes essentially takes the legend and has his own way with it, filling the film with gunfights and barely concealed innuendos that both outraged and titillated (no pun intended) audiences of the time. It's easy to see why Russell became a star, but The Outlaw is a surprisingly week film, leaning too hard on comedic banter between Garrett and Holliday to really be the epic, serious western it clearly wants to be. Holliday is an almost goofy figure, comically detached and aloof, while Garrett is a bumbling fool and Billy a handsome lothario. It's a strange mix that makes for a confused film.

There's one great sequence in which the heroes are chased across the desert by a band of indians. Hughes shoots the film with a terrific eye for scope (one can't help but feel the hand of Hawkes guiding him here), and the practical effects are impressive even by today's standards. When Holliday tries to intimidate Billy by shooting off part of his ear, it looks shockingly real.

Yet its technical prowess can't make up for its uneven direction and scattershot tone. The leads are all capable but none of them seem to be acting in the same movie, as if Hughes couldn't decide what movie he really wanted to make. The film hasn't been treated well by time. Besides the awkward performances, the film itself has worn down, and the new 2K restoration on the new Kino Blu-Ray can't really save its often faded images. It may have made Russell a major sex symbol, but its charms, much like its picture, has been dimmed by the ravages of time, its edge sanded down by shifting mores and the end of the Production Code.